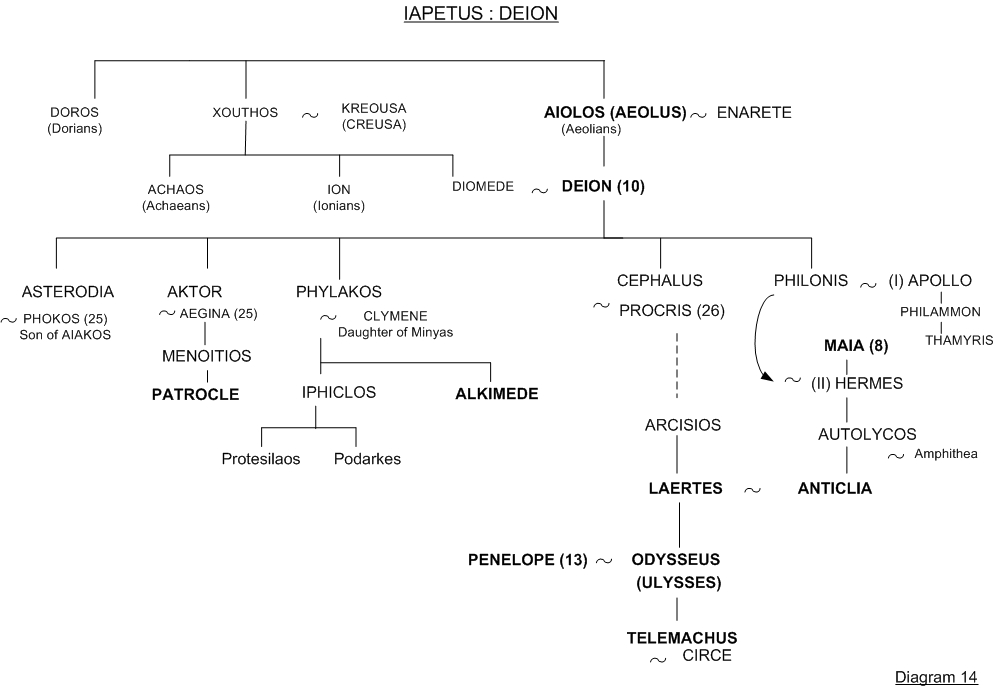 The detailed study of this family tree is in page “THE LINEAGE OF DEION: ODYSSEUS, PATROCLES AND TELEMACHUS”

-Actor “the one who guides” or “the right movement of opening consciousness to the spirit” had a son Menoitios who works for “what is accessible to the spirit”. The latter is the father of Patroclus “the glorious ancestors”, that is to say “the achievements of the past”. Patroclus is the close friend of Achilles of which he is also the cousin (Cf. Family tree 25).

-The other son, Cephalus “the head”, is most likely the father or grandfather of Arcisios “the one who endures” although no reliable source has come down to us. Arcisios is the grandfather of Odysseus, the hero of the Odyssey. He is the symbol of the seeker who works to achieve in himself a transparency in order to allow the free circulation of the two currents which unite spirit and matter.

On this page also appears the maternal line of Ulysses which is well attested. This line comes from the last Pleiad, Maia, “the one who is totally subject to divine consciousness”, symbol of the highest plane in the mind, “the overmind”. Her son is the god Hermès “, a just movement of receptivity-consecration”. His grandson is Autolycos “the one who is his own light to himself”, because the seeker is at this stage united to the divine light and therefore his own guide. Autolycos is the father of Anticlia “humility”, mother of Ulysses.