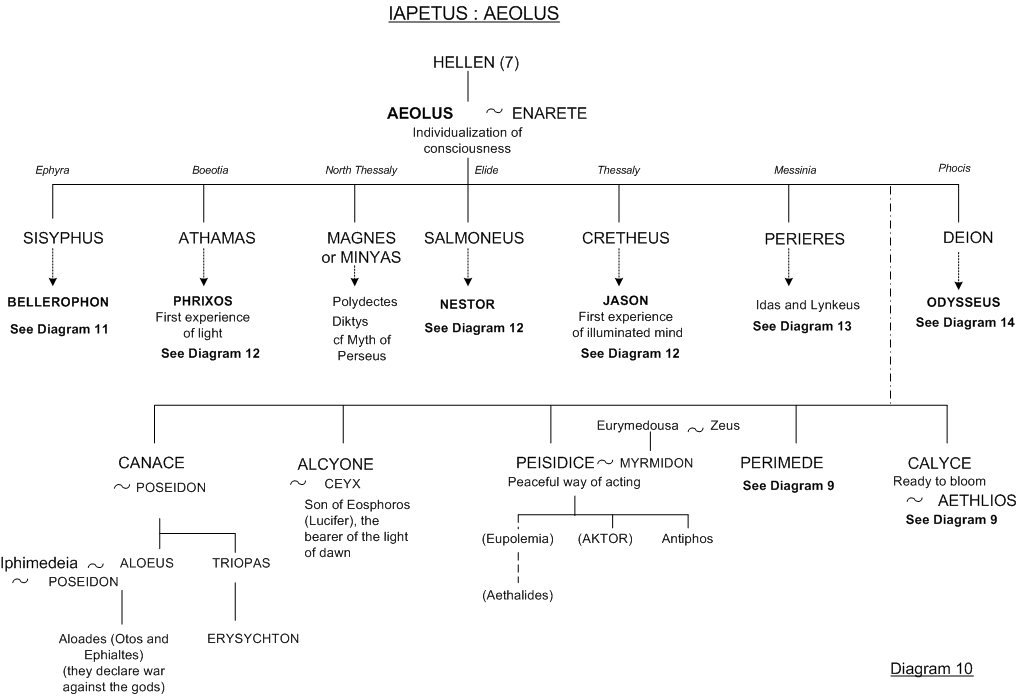 Hellen belongs to the line of Iapetus “the ascent of the planes of consciousness” (cf. Family tree 7 ). It symbolizes the quest for “liberation” with a view to “awakening” according to the name of his wife Orseis.

His son Aeolus, whose name means “one who walks towards freedom or unity in conscience” or “one who is always on the move”, which constitutes the best definition of a seeker of truth, a fortiori of an initiate. He should not be confused with the King of the Winds described in the Odyssey.

He is united with Enarete: the seeker must progress by “what he excels in”, or even, by his “qualities of body, soul and intelligence”.

The children of Aeolus represent a number of experiences and trials that the seeker encounters on his path to liberation. Their descendants will not be described here in detail because they are the subject of separate Family Trees according to the synthesis tree (Cf. General synthesis).

– that of Sisyphus concerns “effort” or “work towards the goal” (“tapasya”) which must allow to overcome illusions (Bellerophon is his grandson).

– that of Athamas concerns the first steps on the path until the seeker finds his own way.

-that of Magnes represents the aspiration which must support progress.

– that of Salmoneus represents improvement in integrity (Nestor), sacrifice (Alceste) and some other progressions.

– that of Cretheus illustrates different progressions until the first great spiritual experience (Jason).

– that of Deioneus concerns past achievements (Patroclus) and the most advanced (Ulysses).

The first five lines are studied in the page “THE FIRST FIVE CHILDREN OF AEOLUS: SISYPHUS AND HIS SON BELLEROPHON, ATHAMAS, MAGNES, SALMONEUS AND CRETHEUS”, the line of Perieres in the page “IXION AND THE BATTLE BETWEEN THE LAPITHS AND THE CENTAURS” and the line of Deioneus in the page “THE LINEAGE OF DEION: ODYSSEUS, PATROCLES AND TELEMACHUS”.