THE LINEAGE OF DEION: ODYSSEUS, PATROCLES AND TELEMACHUS 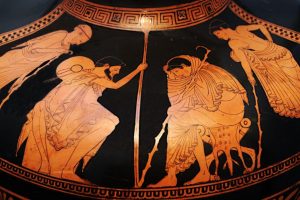 Patroclus behind Achilles (on the left)

It has previously been indicated that in this work we would be using the list of Aeolus’ children given by Apollodorus. However there does not seem to exist any earlier source which confirms beyond doubt Ulysses’ place in this lineage – Hyginus is in fact the only Greek writer to have placed Ulysses’ grandfather Arcisius within this lineage. On the other hand, Pherecydes established a connection through the lineage on the mother’s side, identifying Philonis, the daughter of Deion, as the mother of Autolycos, maternal grandfather of Ulysses. It is for this reason alone that we have considered Deion to be at the origin of one of the most advanced yogic experiences (Ulysses).

On the other hand, no author mentions Actor, father of Menoitius and grandfather of Patroclus, as the human father of Aeacus, father of Peleus and grandfather of Achilles. This is why we established the line of Peleus and Achilles from the river Asopos and his daughter Aegina. Women are indeed at the origin of a lineage only if there is an exclusive fertilization by a god, such as Niobe, Stilbe, Libya, Europa, Danae, Alcmene, Protogenia, and six among the seven Pleiades.

The name Deion can be understood as ‘a union in consciousness’ or ‘the burning one’.

Philonis, ‘she who loves evolution’ (or that which is new), is the only one amongst Deion’s daughters to be mentioned by Pherecydes. If the genealogical placing of Deion which we are considering is exact, then it follows that Philonis entered into unions ‘on the same day’ with both Apollo and Hermes, gods who are respectively in relation with the psychic and the overmind, which is to say with the paths of purification and liberation and the ascension of the planes of consciousness.
From Hermes she bore Autolycos, ‘he who is his own light’, and Apollo engendered the great musician Philammon, ‘he who loves a great consecration’ and who achieves ‘exactness’ resulting from rendering the being psychic (he was a musician).The latter became the first man to instruct young girls’ choirs; through the realisation or achievement of exactness or harmony by the gift of self, he allows the receptive capacities at different levels of the being to work together in harmonious accord. With Argiope, ‘a clear vision’, Philammon engendered Thamyris, ‘numerous right movements’.

In Apollodorus’ version of this myth Deion entered into a union with Diomede, ‘she who concerns herself with union in consciousness’, who bore him four sons and a daughter named Asterodeia (Apollodorus does not mention Philonis here).
Asterodeia, ‘the path towards the light’, entered into a union with Phocus, a son of Aeacus whose lineage we will discuss later on (in manuscripts she is referred to as Asteropia, ‘a vision in lightening flashes’).
Ainetus, ‘he who consents’, does not have any known descendants.
Actor, ‘the guide’ or ‘the opening movement of consciousness towards the spirit’, entered into a union with Aegina, ‘the need for evolution’ (a need more fundamental than aspiration), who bore a son named Menoetius, ‘he who remains in the spirit’. The latter had a son named Patroclus, ‘the glorious ancestors’, who represents the ‘renowned’ accomplishments of a seeker before the great reversal of the Trojan War.
Pindar identifies Actor and Aegina as the parents of Menoetius in the Ninth Olympian, but does not mention Actor’s father by name. Another genealogical ordering identifies Actor as a son of Myrmidon and Pisidice. But in every version of this myth Patroclus is linked to an advanced stage of the path, either through Aegina or through Deion
Phylacus, ‘the guardian’, entered into a union with a homonymous and renowned Clymene who was the daughter of Minuas, ‘the evolution of consecration and of the gift of self’. Clymene bore him a son named Iphiclos and a daughter named Alcimede, sometimes identified as the mother of Jason.
The story of Iphiclos, ‘he who is strongly locked’, has been studied as part of the genealogical branch of Bias and Melampus (See Volume 2 Chapter 2 of this work). It must be remembered that he had become sterile following a violent reprimand by his father, but the seer Melampus discovered the cause of this sterility and cured Iphiclos with a remedy of a homoeopathic nature. Iphiclos then conceived a son, a homonymous Podarces, ‘he who advances swiftly’, who became one of Helen’s suitors and an Achean leader against Troy.
– Cephalus, the mind, entered into a union with Procris, ‘she who puts forward the right movement of the opening of consciousness, she who chooses and severs’. The story of Cephalus and Procris has been studied earlier in this work along with that of the Athenian Kings (See Volume 2 Chapter 4). It more closely refers to the beginnings of the path, which confirms the doubts expressed earlier in this work regarding the genealogical order of descent which makes Procris the great-grandmother of Ulysses, this version being given by Hyginus alone.

Ulysses, who can be considered to symbolise the most advanced of seekers who strives for a ‘union of the two currents uniting spirit and matter’, would logically be the descendant of ancestors in both the branch of liberation and the branch of the ascension of the planes of consciousness. On Iapetus’ side, this ascendency is already marked by his ancestors on his mother’s side, who include Hermes, ‘the overmind’, and Philonis, daughter of Deion. It would therefore appear to be more sound to ascribe to him a paternal ascent in the genealogical branch of Oceanos. But due to a paucity of mythological sources this question will have to be left unresolved, as was that of Tantalus and the Atrides.

Ovid identifies Ulysses as the grandson of Arcisius, ‘he who holds firm and who endures’, himself son of Zeus. (The name Arcisius is built on the same root as Arcas, origin of the Arcadian lineage which we will be discussing at a later point in this work, and which eventually leads down to the heroine Atalanta, ‘equality’. The name of Arcisus’ wife does not appear in any myth.)

The genealogical order becomes clearer from Arcisius onwards. The latter engendered Laertes, whose name could signify ‘he who sets into motion’ or ‘gathers together the people’ (the different elements of the being), or could also be derived from λαω, ‘to see’.
Laertes entered into a union with Anticlia, ‘the greatest humility’ (opposed to spiritual pride), who bore him a son named Ulysses (Odysseus in Greek).
It was Homer himself who, through Autolycos’ words, gives one of the meanings of the name Odysseus: ‘Lo, inasmuch as I am come hither as one that has been angered with many, both men and women, over the fruitful earth, therefore let the name by which the child is named be Odysseus. And for my part, when he is a man grown and comes to the great house of his mother’s kin at Parnassus, where are my possessions, I will give him thereof and send him back rejoicing’ (Odyssey, Book 19, line 405). The seeker who since long strives to guide himself by his own inner light complains that aspects of his egotistical personality have created many obstacles, preventing him from perceiving Truth and deviating him from due progress. The seeker is therefore ‘angered’ or frustrated at being unable to act with exactness in his own imperfection, hence the name Odysseus which may carry the meaning of ‘angered’ or ‘ulcerated’ depending on the translation (Derived from the Greek verb Οδυσσομαι, ‘being irritated’). This annihilation animates his incoercible need to find Truth, and this ulceration may perhaps refer to the need of ending the rule of the personality, ultimately leading to a state of ‘nullity’ which leaves space for the inner fire (thus becoming ‘nobody’ as Ulysses says to the Cyclops Polyphemus).
Pierre Chantraine, one of the greatest French scholars of the Greek Language, author of the Etymological Dictionary of Greek language, who is considered to be an expert in this field, explicitly affirms that the true etymology of this name remains unknown. As there also exist form Olysseus (Ολυσσευς) with a lambda instead of a delta from which originated the modern form Ulysses through the Latin, we can take the liberty of using the structuring characters to understand this name. Odysseus would be spelled either Δ+ΣΣ, or Λ+ΣΣ, which is to say the symbol of liberation or of union obtained by bringing together the two essential masculine and feminine principles, the symbol of ‘he who strives for the union of the two opposing currents which unite spirit and matter’. These two currents form the Caduceus of Hermes.

As long as irritation (or ulceration) and integrity are not sufficiently developed, the seeker knows that he will have to find in the application of humility elements of a superior understanding, which will become quite necessary for the undertaking of his journey into the new yoga (humility because Ulysses is to go to the maternal manor, which is to say by the side of Anticlia, ‘humility’).
Anticlia’s manor is located on Mount Parnassus. This mountain, the etymology of which name remains obscure, was consecrated both to the god Apollo and to the nine Muses. It was in fact one of the two dwelling-places of the Muses, the other being Helicon, (‘helical or spiralling movement’, echoing the movement of yoga which is a spiralling ascent towards the supramental Helios).
In the Odyssey, Homer adds that in his youth Ulysses was wounded by a monstrous boar while accompanying his maternal uncles, the sons of Autolycos, on a hunt (this incident taking place well before his departure for Troy). The boar lay hidden beneath some shrubbery, under a covering so thick that neither rain, wind nor the rays of the sun could penetrate through it. During the hunt it attacked Ulysses, tearing away part of his thigh with his tusk before Ulysses pierced him with his spear. The hero was attended to by the sons of Autolycos, who used a medicinal charm to stop his bleeding.
This adventure describes a period situated a little before the great reorientation of yoga (before Ulysses’ departure for Troy), for the seeker who has begun the work of the union of spirit and matter already has access to some knowledge from the light of the overmind (his uncles are the sons of Autolycos, ‘he who is his own light’, himself a son of Hermes). With their help he strives to discover and eliminate from his nature the most archaic of brute vital forces, but before achieving this he is seriously wounded and his power is diminished (his thigh is wounded), so that he can recover only with the intervention of the light of the overmind. This story illustrates the great difficulties which the seeker encounters in his attempt to master the vital forces. At this stage it is no longer a question of the ‘conversion’ of the individual’s vital, the latter having since long given its full agreement and support to the yogic work.
This relationship between Ulysses and the overmind is confirmed on the one hand by the identity of his great-grandfather Hermes, and on the other by Homer’s description of him as ‘Ulysses whose thought is equal to Zeus’.