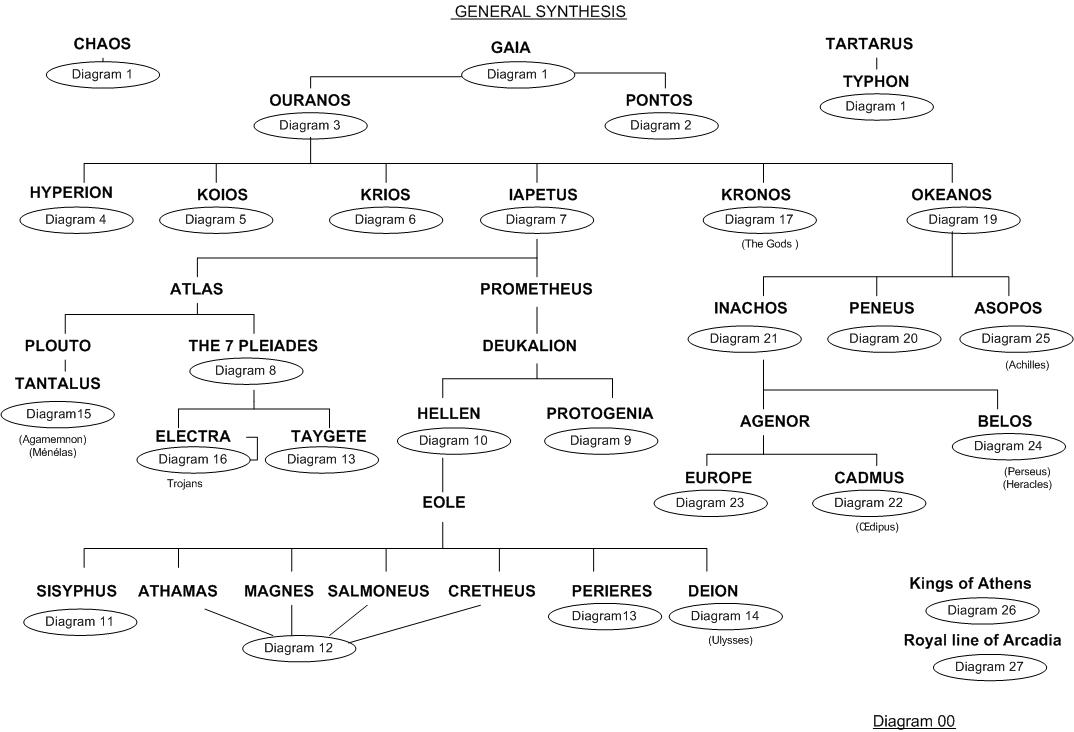 This diagram shows how the whole of Greek mythology is organized from the first principle “Gaia” which, before it splits, symbolizes the unity Existence / Consciousness. At the same time (but this is still a step which precedes creation, therefore space-time, therefore out of time!) appears Eros, the principle which links Existence and Consciousness and is expressed by divine ecstasy, bliss or Ananda of the Vedas.

Then Gaia “gave birth, equal to herself – he had to be able to hide it, to wrap it entirely – Ouranos the starry sky, so that it was, for the blessed gods, a stay forever stable”: the first principle splits into Consciousness (Ouranos) and Existence (Gaia) which, by successive densifications will be manifested by Spirit and Nature (Matter).

This first principle also gave birth to Pontos, the Life, and Ourea “the high mountains” which are the symbols of the way in which humanity can achieve union with the Divine in the Spirit.

Then Ouranos engendered with Gaia the powers of creation, the six Titans and the six Titanides, from which all the genealogical trees of mythology come according to a perfectly logical structure.

Two lines of Titans are of major importance and are synthesized in the following diagrams: that of the Titan Iapetus which concerns the ascent of the planes of consciousness and that of the Titan Oceanus which deals with the process of purification / liberation.

The main gods belog to the lineage of Cronos. 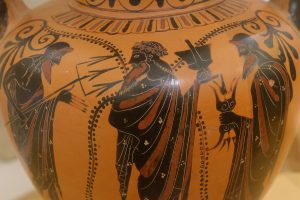 However, for a very small number of family trees, either the ancient masters of wisdom did not voluntarily connect them to the general structure, or the indications of connection did not reach us or are little attested. This is the case for “The Kings of Athens”, “The royal line of Arcadia” and “The line of Tantalus”.

The numbers indicated under the names of the characters refer to the corresponding detailed Family Tree.

General information is given under the “Genealogies” tab.

Note that for some names, the Greek OS ending has been preserved.