Family tree of Japet – Ascent of planes of consciousness 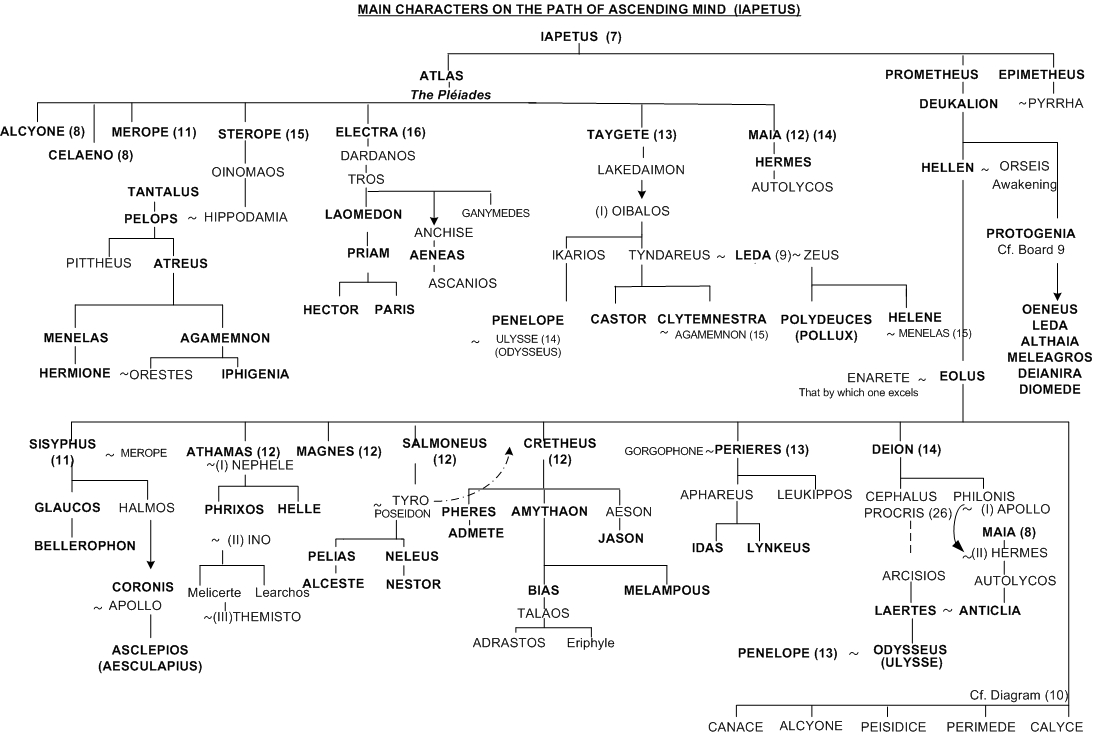 The family tree of Iapetus presented here concerns the ascent of the planes of mental consciousness. Only the characters who are the most famous and / or have a major importance in the myths are represented. For the other characters, see the corresponding detailed trees.

See the page “The structure of mythology” for a detailed description

-Alcyone represents the physical mind
-Celaeno symbolizes the vital mind
-Merope, wife of Sisyphus, embodies the intellect or mind of reason
-Sterope is the symbol of the higher mind. In his descendants is Hippodamia “mastering the vital”.
-Electra, symbol of the enlightened mind, is associated with the Trojan royal line including among heroes Laomedon, Priam, Hector and Paris.
-Taygete represents the intuitive mind. In his descendants are the Dioscuri Castor and Pollux as well as Clytemnestra and Helen, the latter being the cause of the Trojan War
-Finally Maia represents the overmind and has for son the god Hermes.

The second line is that of Prometheus “the one who puts forward (in priority) his submission to the inner being”. It illustrates the major experiences and achievements that the researcher will encounter in ascending the planes of consciousness. It has two branches: that of Hellen which concerns ordinary seekers of truth, and that of Protogenia “those who walk in front”, that is to say the adventurers of consciousness.

-Sisyphus and his grandson Bellerophon: the work of the intellect and the fight against illusions.
-Athamas: progress towards understanding integrity
-Magnes: progression in aspiration
-Salmoneus: with Nestor, the evolution of integrity
-Cretheus: his grandson Jason illustrates the first great spiritual experience
-Perieres: with Idas and Lynceus, the perfection of the overall vision and the vision of details
-Deion : he is the ancestor of Ulysses (Odysseus), the most advanced researcher on the way.

The Protogenia branch, symbol of the most advanced realisations, includes among others Œneus, Leda, Meleagros, Deianira and Diomedes.