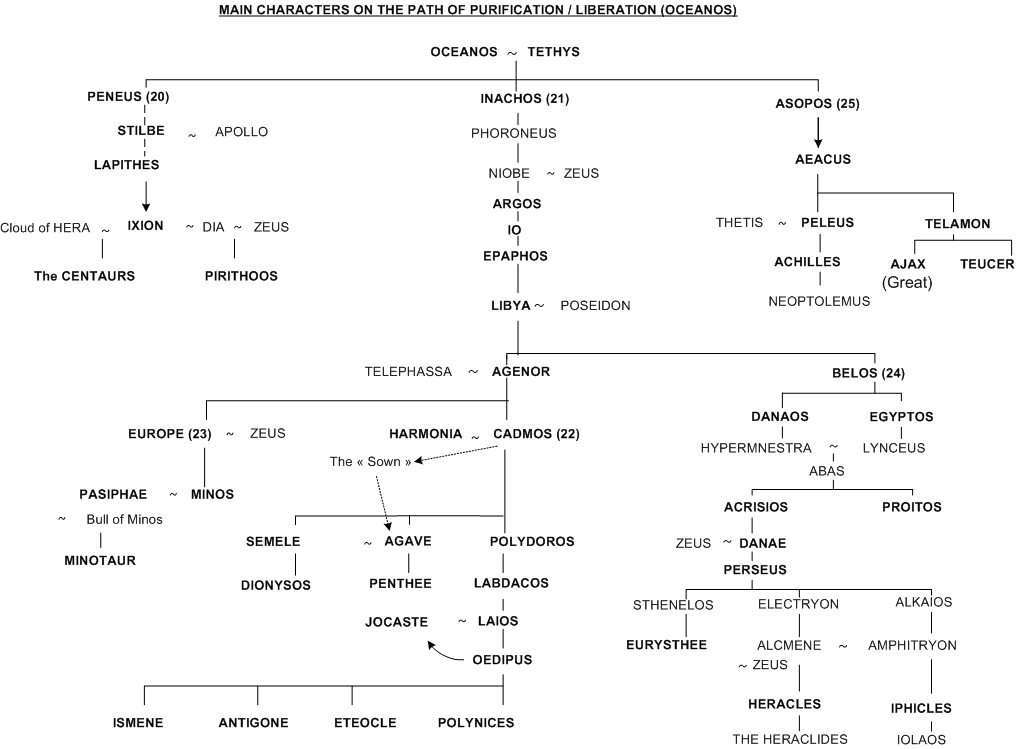 The Oceanus family tree presented here concerns the process of purification / liberation. Only the characters who are the most famous and/or have a major importance in the myths are represented. For the other characters, the reader will refer to the corresponding detailed family trees.

The lines from Oceanus are composed of river-gods for the male characters and of Oceanids which are nymphs attached to rivers, sometimes also these rivers themselves.

See the page “The structure of mythology”.

The river-gods personify currents of consciousness-energy corresponding to yoga processes such as Inachos “the evolution of concentration”. Three of them are of major importance in myths: the Inachos, the Peneus and the Asopos. From the Inachos come great heroes such as Perseus, Heracles, Minos, Dionysus and Oedipus. From the Asopos come Ajax and Achilles and from the Peneus the Lapiths.

The Oceanids, which according to Hesiod are more than three thousand, are aquatic nymphs (but not marine because the sea is the domain of Pontos, personification of Life). Most often attached to rivers, they represent divine qualities that man must acquire or recover through yoga.

The best known of them are:

– the Styx, river of the underground world (Styx is a feminine word in Greek)

– Metis, Athena’s mother, who was swallowed by Zeus

– Pleione “the one who fills”, Atlas’s wife. The seeker who integrates Pleione gradually fills the chasm between Spirit and Matter.

– Dione “evolution towards union “, which is united to Tantalus “the aspiration”.