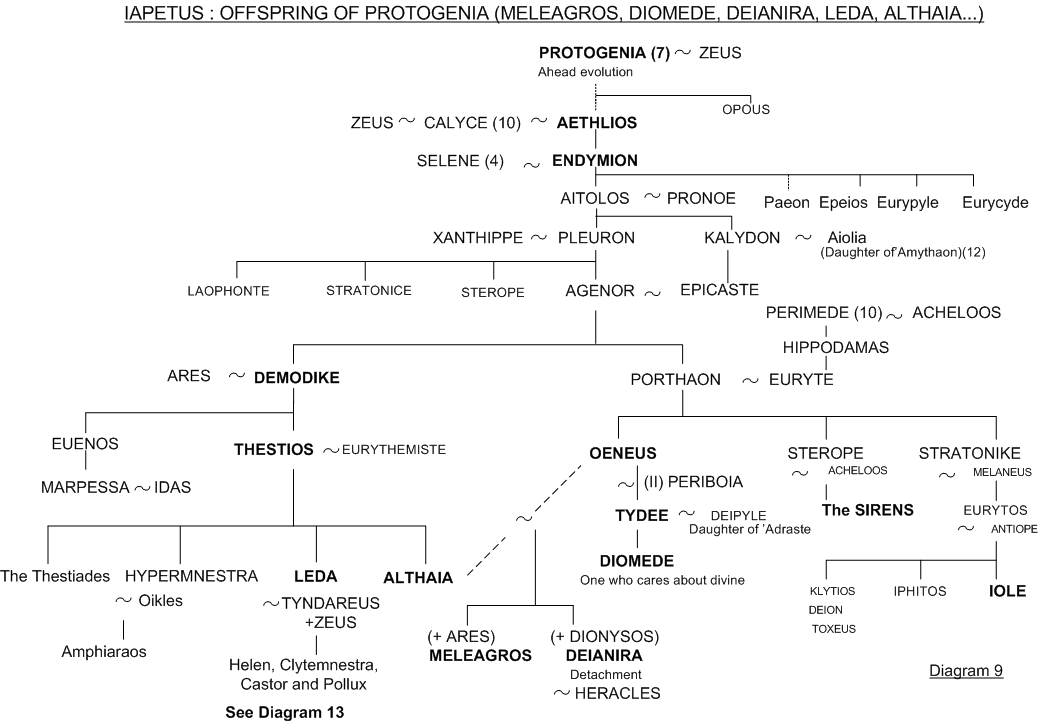 FAMILY TREE 9 – THE DESCENT OF PROTOGENIA

Protogenia, whose name means “who walks in the lead” (of the progress of humanity) belongs to the line of Iapetus “the ascent of the planes of consciousness” (Cf. Family tree 7 and Family tree 8). It therefore concerns the adventurers of consciousness and the avatars who open the paths of the future in this ascent. Protogenia being a female character, it is about achievements and not yoga work.

A detailed study of this genealogy can be found on the page “The Calydonian boar hunt”.

The first important achievement is embodied by Endymion “the one whose conscience is consecrated”. His lover is Selene “the moon”. At his request, Zeus granted him eternal sleep, a symbol of the disappearance of the ego. This allows the “true personality” represented by Selene, daughter of Hyperion (see Family tree 4), to take its rightful place in the evolution of the adventurer.

The descendants of Endymion to Agenor concern a deeper vital purification.

The descendants of Agenor appear in two branches:

The branch of Demodike whose granddaughter is Leda illustrates the development of a very great sincerity or integrity. Leda united with Tyndareus who belongs to the line of Taygete “the intuitive mind”, and they had four children including Helen who was at the origin of the Trojan war. It is therefore for the adventurer an intuitive mind work for a greater union.

The other branch where is Oeneus relates more to “divine intoxication” with its corollary, the paradises of the Spirit represented by the Sirens, paradises where the adventurer can get lost.

It is in this branch that we can find Iole, the last union of Heracles who will cause his death following the jealousy of Deianira.

Oeneus had a second affair with Althaia, sister of Leda, who gave him two children: Meleager “the work of adjustment or exactitude” and Deianira “the detachment”.