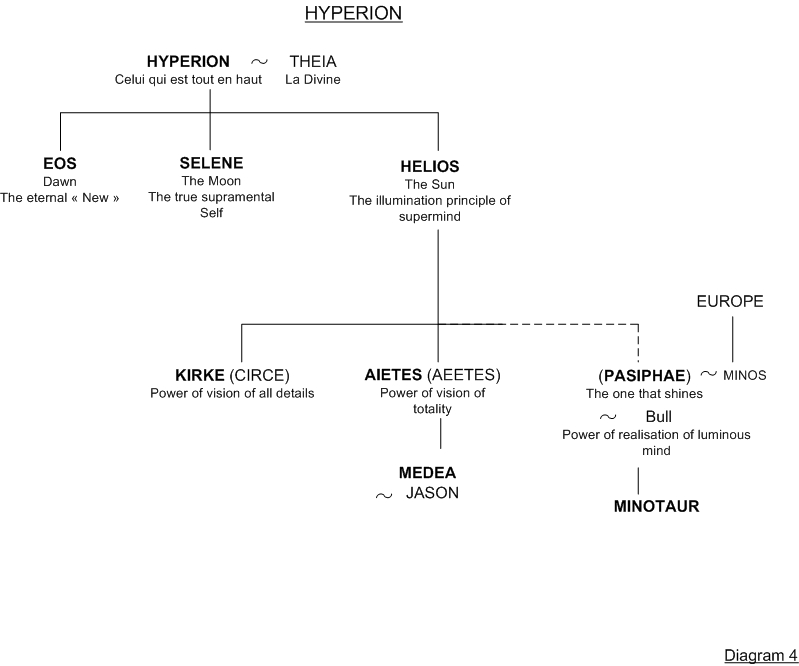 Hyperion symbolizes the highest level of the creation plan, the highest degree of creative power. He is one of the six Titans sons of the Ouranos-Gaia couple (cf. Family tree 1). His descendants are studied in the page “HYPERION: HELIOS AND PHAETHON, SELENE, EOS“.

His partner Theia is “the Divine” with whom he had three children:

-Helios, “the sun”, the illuminating principle of the supramental.

-Selene, “the moon”, the realizing principle at the top of the creation plan.

-Eos: the goddess of dawn “with fingers of a rose”, embodying the “eternal new”, in resonance with divine Joy, Ananda or Eros.

In the oldest legends Helios had only two children:

-the sorceress Circe who symbolizes the power of vision or discernment of Truth, “the penetrating vision that sees in detail”. She forces you to see what you are and brings the hidden elements to the surface.

-the king of Colchis Aeetes (or Aietes) symbol of the higher consciousness “which sees the totality” and controls the capacity of realization in the mental: he has the control of the most indomitable bulls. Jason will have to put his bulls under the yoke in order to take away the Golden Fleece. He is the father of the magician Medea who married Jason and killed her own children.

When the myth of Daedalus later developed, the initiates added another child of Helios, Pasiphae “the power of radiation”, wife of Minos. In love with a bull, she gave birth to the Minotaur, symbol of a major error on the spiritual path: the appropriation by the ego of the realizing power of the luminous mind that just appears in the seeker.