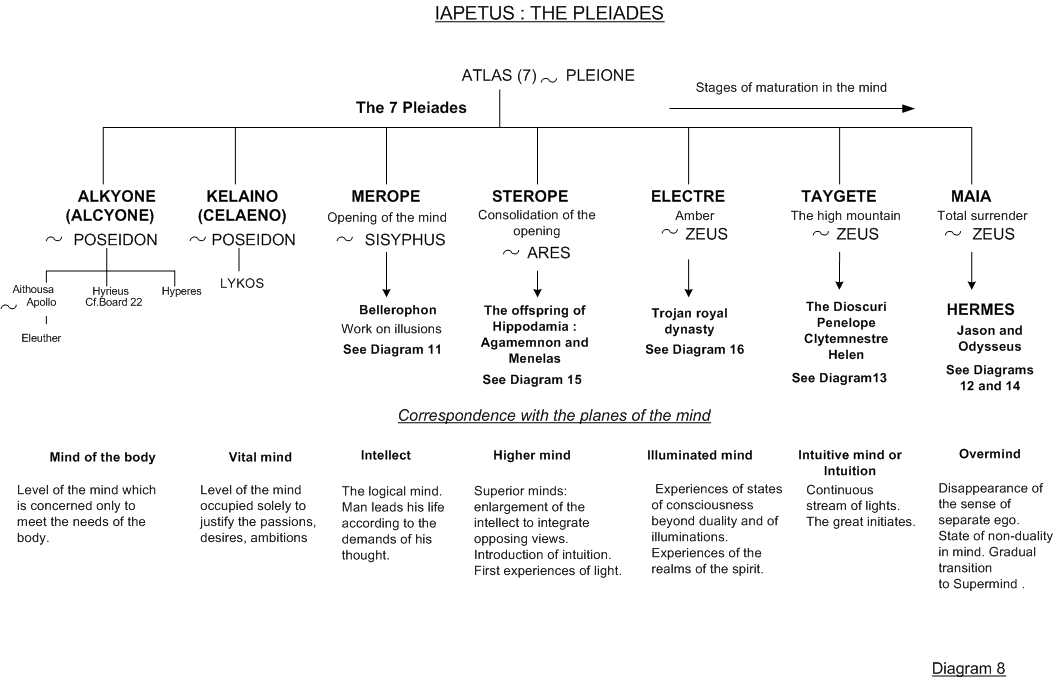 The seven Pleiades are daughters of Atlas, himself the son of Iapetus. They therefore relate to the ascent of the planes of mental consciousness.

At the end of the war which opposed the gods to the Titans, that is to say when the mind imposed its domination on the vital (instincts, impulses, emotions) in human behaviour, Zeus condemned Atlas to carry the sky on its shoulders. From this moment, the forces of the overmind cut off humanity from its consciousness one with the divine, with nature and with others, introducing a consciousness of separation. This chasm between mental mind and matter, man must fill gradually over the millennia by the ascent of the mental planes.

The mental plane is taken here in the broad sense, that is to say that it includes the two aspects of separation and fusion, which divides to better organise such as the intellect and which brings back to unity by intuition.

The seven Pleiades correspond to seven levels of realization in the mental plane.

These plans are described in detail on the page “Iapetus: Atlas and the Pleiades“.

The first two Pleiades, Alcyone and Celaeno, united with Poseidon, illustrate subconscious planes. These planes are made up of what the human mind added to the five planes of animal consciousness (cf. Pontos Family Tree) to guarantee the survival, socialization and affirmation of the individual ego.

The third plane is represented by the Pleiad Merope which embodies the intellect or mind of reason. This is the plane that humanity is struggling to develop at present because it must allow everyone to build an independent thought, free from prejudices, opinions and influences of all kinds, which should allow him to direct his own life end be responsible for it. Among other accomplishments, man must free himself from illusions because the grandson of Merope, united with Sisyphus who symbolizes “effort”, is Bellerophon, winner of the Chimera.

Sterope is the symbol of the fourth plane, the higher mind, which concerns the higher spirits in today’s humanity.

The three higher planes integrate an increasingly accurate intuition after mental silence has been achieved.

Finally, Maia represents the overmind that man reaches when he becomes the equal of the gods. That’s why Maia’s son is the god Hermes.