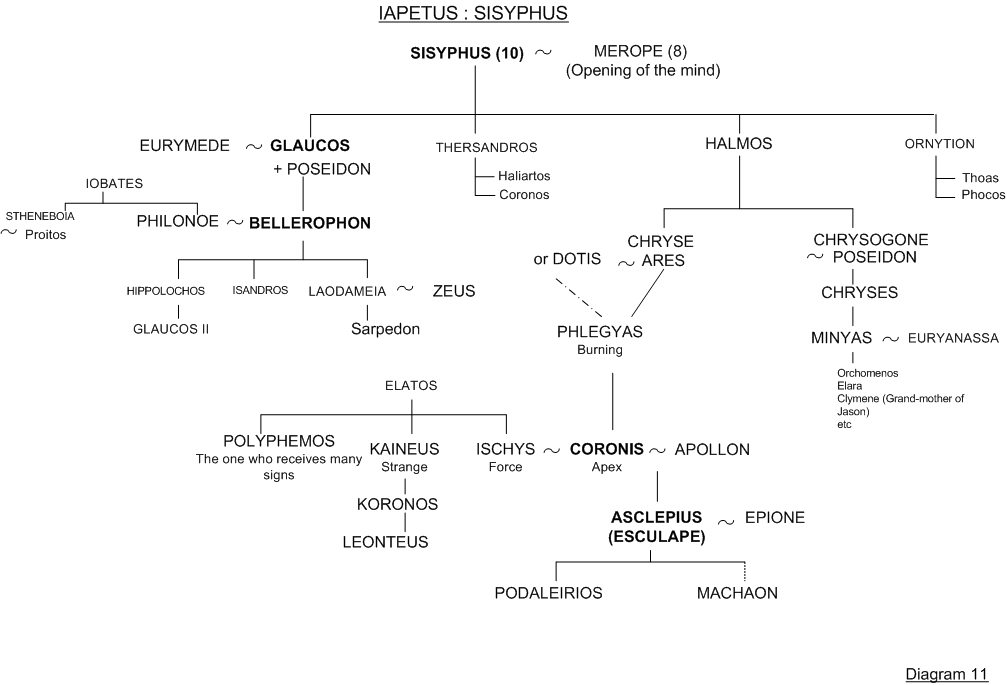 Sisyphus, son of Aeolus, belongs to the line of Iapetus “the ascent of the planes of consciousness” (cf. Family tree 10 and Family tree 7). It is studied in detail as well as his descendants in the page ” THE FIRST FIVE CHILDREN OF AEOLUS: SISYPHUS AND HIS SON BELLEROPHON, ATHAMAS, MAGNES, SALMONEUS AND CRETHEUS“.

Its name means “skill of mental awareness”. It mainly represents “effort” in yoga or “tapasya” in the Indian tradition. This effort is directed towards perfecting the intellect or mental of reason because his wife is Méropé, the third Pleiad (Cf. Family tree 8). The seeker of truth must establish in himself a thought purified from the influences of the vital, free from opinions, prejudices, ideologies and creeds, and free from all influence.

The result of this work must be the victory over illusions because the grandson of Sisyphus is Bellerophon, the winner of the chimera.

Another descendant of Sisyphus by women is the great healer Asclepius, the ancestor of doctors. However, it is a medicine illuminated by psychic inner light because the divine father of Asclepius is Apollo.

The punishment inflicted on Sisyphus by Zeus is famous: “Sisyphus had to roll a huge rock on the side of a mountain. But while he was about to go beyond the top, he fell down, swept away by the weight of the rock and had to tirelessly start this exhausting work”. However, this work does not concern the ordinary seeker but the adventurers of consciousness who do yoga in the body. Indeed, the punishment takes place in the kingdom of Hades after the death of Sisyphus, and therefore at the level of the bodily unconscious. The myth then means that “effort” is almost useless when it comes to working on the body at the cellular level.