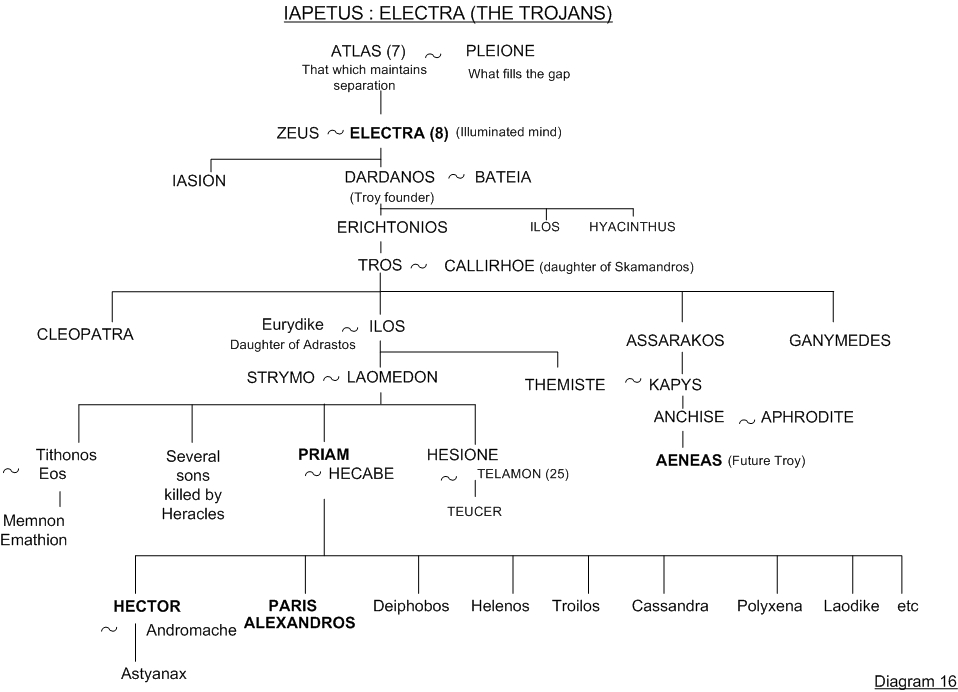 Electra is the fifth Pleiad and corresponds to the plane of the “illumined mind” (See Family Tree 7 and Family Tree 8 “). Recall that the seven Pleiades are daughters of Atlas, himself the son of Iapetus. They therefore relate to the ascent of the planes of mental consciousness.

The descendants of Electra include the royal lines of the Trojans. Troy being located to the far East of Great Greece at the time of Homer, in present-day Turkey, these lines represent the seekers who stabilized in themselves the “illumined mind”. But it was the result of a conquest in the mind and a rejection of matter, according to the meaning of the name Tros. The Trojan War which pitted the Trojan coalition against the Achaean coalition is the symbol of an internal struggle to determine which is the best way to achieve stabilizing the next plane of mental consciousness, that of the “intuitive mind” represented by Helen (see Family tree 13).

This line is studied in detail in the page ” THE ROYAL TROJAN LINEAGE: LAOMEDON, PRIAM, HECTOR, PARIS AND AENEAS “.

Dardanos is considered to be the founder of the lineage.

His grandson Tros established the Trojans in the region of Phrygia, “where the inner fire burns”. He had three sons:

-Ilos, the one who seeks greater “liberation”, the founder of Troy.

-Assarakos, the one who perfects “equality” which is an “equanimity” extended to all bodies. It is from this line that the founders of the future Troy will come, in the descendants of Anchises and Aeneas, when the Truth will have been established in humanity.

-Ganymedes, the one who works to make “joy” grow in himself.

But it is the descendants of Ilos “liberation in spirit” that governed Troy until the war. His son Laomedon, twice, will be perjury, which illustrates serious errors of yoga. He represents the seeker who refuses for lack of humility to recognize that he is not the architect of his own liberation.

With Priam “the redeemed”, the seeker is given a second chance. But he joins Hecabe “the one who is out of the incarnation”. Thus continues with the children of the Priam-Hecabe couple the Trojan error: among them, the divine Hector and Paris renamed Alexander “the one who repels man”, that is to say who rejects the incarnation.