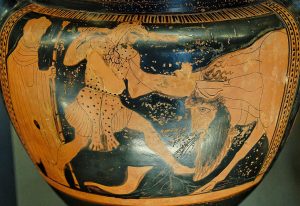 While the descendants of Iapetus and Clymene represent the efforts in the ‘ascension of the planes of consciousness’, those of Oceanos and Thetys describe an evolution through incarnation in accordance to nature. They imply both a ‘purification’ of the lower planes from the distortions originating from ignorance and the mixing of functions, and a ‘liberation’ from the elements necessary for their construction, including attachments, desires and ego, which must be progressively eliminated. This is why Oceanos ‘flows towards his origin’; the process of purification and liberation must be carried out till the origins of evolution.

The initiates of ancient times have therefore included here the currents of energy-consciousness which supports this evolution.
These are:
The Oceanides, forces supporting an evolution in accordance with nature and infinite modalities of the manifestation of the Absolute in creation. According to Hesiod they number three thousand, which is the figure of the Absolute (three) at the highest level (thousand).
Along with the rivers and with Apollo, they help raise young people. They are therefore aids or supporting forces for the seekers who have engaged themselves on the path.
Depicted as beautiful young women, they were erroneously associated with the Nymphs, spirits of nature including the Dryads, Naiads and Oreads, although neither Homer nor Hesiod had placed them in this category originally.

The ‘rivers and streams’, which describe the main directions of the tasks to be carried out. Through their descendants are exposed the teachings and experiences accompanying the different paths of evolution that are in accordance with nature. Amongst the most important are:
In the descendance of the river Inachos, ‘the progression of concentration’, known to be the most ancient river of Argolide and the origin of the lineage of the Inachides, are found the processes of purification and liberation, necessary preambles to any future evolution.
Amongst the descendants of the rivers Peneios and Asopos, origins of the Lapithian and Asopid lineages, are found the experiences of the most experienced of seekers.

According to Hesiod, there as many rivers as there are Oceanids, which is to say as many paths towards the Absolute as there are human beings.

The name Oceanos (Κ+Ν) represents ‘an expansion of consciousness in accordance to the evolutionary process of nature’. The character omega at the beginning of the word implies that the phases of this evolution always begin in the body.
His partner, the Titanide Tethys (Τ+Θ), seems to indicate an evolution in the depths of the being, while as a couple Iapetus and Clymene strive towards the heights. (Tethys must not be confused with Thetis (Θ+Τ), the daughter of Nereus and the mother of Achilles.)

Hesiod describes Oceanus as encircling ‘the limits of the all-nurturing earth’, thus forming an ethereal double of the body, and being the source of all the streams, salty or non-salty (Iliad 14.198). Just as the currents are divided into an unlimited number of rivers and streams, so the body is filled with innumerable currents of energy.
In several passages of the Iliad (Iliad 14.200; 14.244 ; 14.300), Oceanos is said to be the origin of all the other gods, and therefore of the currents of energy-consciousness which all originate in the same source. (Let us remember that he is not to be confused with Pontus, who symbolises phases of growth in the vital plane.)

The rivers appear in the heroic stories depending on the necessities of evolution. Issued directly from the generation of the Titans, they share the same rank as the gods.

There is a multitude of female Oceanides, ‘a holy company of daughters who with the lord Apollo and the Rivers have youths in their keeping (…)For there are three thousand neat-ankled daughters of Ocean who are dispersed far and wide, and in every place alike serve the earth and the deep waters, children who are glorious among goddesses ‘ (Theogony 346-368).
Their names signify ‘they who are covered or veiled’; they are the forces which act in all places (on the earth and in the oceans, in the vital and in the mind), but without man’s awareness.
As goddesses of the same rank as the Olympian gods they are immortal, and hence exist in non-duality. They act on humankind with extreme suppleness and delicacy (they are neat-ankled); the Divine works in each individual at each moment with the best interests for his evolution and with the greatest precautions.
The Oceanides are the ones to direct the movements of yoga (the youths) till they reach maturity, or till the seeker is able to follow his own method of yoga.

Hesiod mentions forty-one Oceanides, but the Homeric hymn to Demeter only includes twenty-one of them. Certain authors, insisting on a particular aid being necessary at specific moments of the quest, added several others.

If the Oceanides are the forces sustaining evolution, then the innumerable swirling currents represent evolutionary processes or conscious moments of learning, swirling movements which already exist in nature. Aside from image of centres of energy, we can perhaps see in the swirling currents the fact that difficulties present themselves again and again till their resolution is complete.

Only a few of the river gods are of major importance, the rest only rarely intervening in the heroic stories. The two major ones, Inachus and Asopos, include in their descendance almost all the myths classified here as illustrating the process of purification and liberation. They are mentioned neither by Hesiod nor by Homer, but appear from the middle of the 5th century BCE in the works of Aeschylus and Pindar.

The river god Inachus (Ν+Χ) is the symbol of ‘the evolution of the gathering of consciousness’, the ‘evolution of concentration’ or ‘the evolution towards emptiness and the abolition of the ego’ depending on the meaning given to the character Khi. It can also be the image of a ‘suffering (εν+αχος)’ which is often the element instigating the quest.
It is the great river of Argolis, the land of ‘the luminous’ and therefore of ‘the seekers of truth’.
His descendance gathers together what is essential of the teachings and experiences on this path of incarnation. The very first generations also evoke the spiritual realisations of earlier civilisations.

According to certain authors, he is either the father of Io ‘the opening of consciousness in incarnation’, or one of her ancestors. The generations intercalated in the latter version had the objective of either introducing the people of Argolis and of facilitating understanding (Phoroneus, ‘he who is carries evolution’, Niobe, ‘the incarnation of consciousness’ known as ‘the mother of all living beings’ for she incarnates one of the first experience of the seeker that “this is real”, and Argos, ‘the luminous’), or of bringing coherence to a number of generations of this lineage, which was a real puzzle for many of the mythologists of ancient times.
Beginning from the time of Io, different authors enter into agreement. We encounter in succession her son Epaphus, ‘the touch of the Absolute’ and the first contact of the seeker with his psychic being, followed by the twins Agenor and Belus, whose descendance describes the theoretical and practical teachings of ‘purification’ and ‘liberation’.

The genealogical branch of Agenor, purification, is divided in its turn into two sub-branches. That of Cadmus opens the royal lineage of Thebes, the object of which is to be the path of the regaining of divine harmony and of the universalisation of the centres of energy. In Crete, the genealogical branch of Europa relates to the opening of consciousness and the evolution of discernment, and addresses the associated risks of closing upon oneself into mental structures following major experiences, as is illustrated by the legend of the Minotaur.

The genealogical branch of Belos illustrates the theoretical teachings in view of ‘purification’ and ‘liberation’, notably in the victory over fear (Perseus) and in the Labours of Heracles.

His name evokes a stabilisation of evolution, which implies a path of incarnation (suggested by the name of his wife, Creusa). His lineage illustrates a lack of purification of the deep vital (the Centaurs), as well as different forms of spiritual pride (Ixion, the Molionidai and the Aloades) which can occur when the seeker believes that he has attained the highest level of the overmind.
In this lineage also appears Pirithous the companion of Theseus, ‘he who experiments swiftly’, an expression of the seeker who swiftly integrates the experiences of life without needing them to be renewed, and without lingering on situations which do not elicit evolution.

With him, the seeker leaves behind the familiar landscapes of the quest and ventures into the quagmire of vital and physical memories. This river is the ancestor of the great Ajax, ‘superior consciousness’, and of Achilles the king of the Myrmidons (the king of the ants), who takes care of the truly small details to which we ordinarily give no importance and to the purification up to the bones. Without his intervention, the Trojan War would have never been won by the Greeks.

He was the eldest of the sons of Oceanos, and therefore represents the most ancient process of evolutionary learning. He is also ‘the largest river in Greece’, which is to say the most wide-spread asceticism. He created the Echinades, a group of islands representing the origin of ‘concentration’. This river of silver currents flows in Aetolia, where is located the city of Calydon; it is therefore associated with the battle for the mastery over the archaic vital energies.
Heracles had to challenge him to combat, for he also aspired to enter into a union with Deianeira, ‘detachment’. To engage in this struggle he had taken the form of a bull, ‘the power of realisation in the luminous mind’. This is therefore a current of consciousness which can manifest itself under different aspects.
Achelous is the father of the Sirens (borne by Sterope, homonymous to the plane of the higher mind), symbols of the different mental rungs of rapture which the seeker can attain over the course of the quest, and from which he must flee as swiftly as possible if he wishes to continue on the path (the Sirens of Greek mythology are birds with women’s heads).
He is therefore the symbol of an asceticism aiming at ‘detachment’, of a liberation on the vital plane.

This was the major river flowing through the Trojan plain, named Scamander, ‘partially receptive man’, by mortals and Xanthus, ‘golden yellow’, by the gods; mortals considered it from the mental plane, while the gods ‘saw’ it according to the colour of its vibration, the colour of the illumined mind. From him flowed two currents, the one warm and the other cold; it represents the non-dual from which emerges duality (at the solar level of Tiphereth in the Kabbalistic Tree of Life). It flows through the plain of Troy, the heroes of which belong to the illumined mind, the plane of mental non-duality, but in which the ego is maintained in the deepest layers. It is only in the overmind, the plane of all possibilities, that the ego entirely disappears. The Scamander flows from its source on Mount Ida, the mountain of union.