Styx and the Sirens – Family tree 19 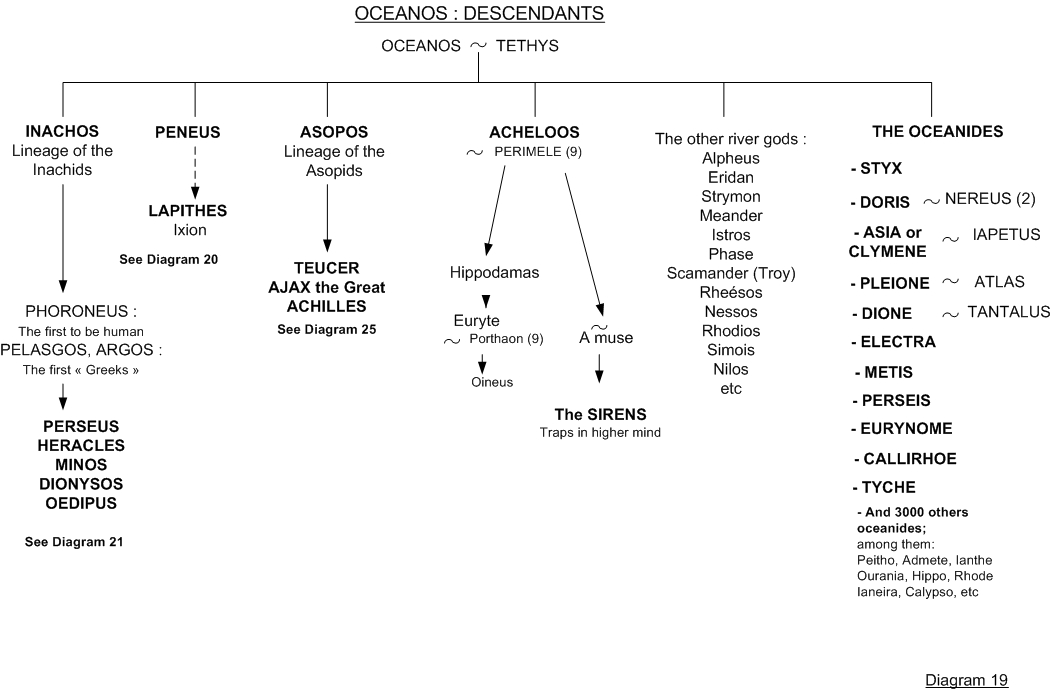 This page presents the lineages from Oceanos which relate to the purification / liberation process. A general description of these lines can be found on the page ” OCEANOS: RIVER-GODS SCAMANDER AND ACHELOOS AND OCEANIDES“. An overview of the three main lines also appears in the “Family tree of Oceanus – Purification and liberation“: they concern the descendants of the three main rivers, Inachos “the evolution of concentration”, the Peneus “evolution of mastery “and Asopos which could indicate progress in achieving” equality “.

We have established the line of Peleus and Achilles from the river Asopos and his daughter Aegina because no author mentions Actor, father of Menoitios and grandfather of Patroclus, as human father of Aeacus, the latter being father of Peleus and grandfather of Achilles. A line is indeed continued by a woman if there is an exclusive fertilization by a god, such as Niobe, Io, Stilbe, Europa, Danae, Alcmene, Protogenia, etc. and six among the seven Pleiades.

Apart from the major river gods, there are many rivers representing particular currents of consciousness-energy which intervene in precise phases of yoga. Thus the Alpheus is used by Heracles to purify the stables of Augias which represent the slag from the first light experiences. Eridan intervenes in the myth of Phaethon. The Scamander named Xanthe by the gods, the Simois, the Rhodios and the Rhesos are rivers of Troad which concern the advanced seekers.

Many Oceanids also come from Oceanos – according to Hesiod there are more than three thousand. They are nymphs generally attached to running waters, sometimes also these rivers themselves.

They represent divine qualities pouring out on the earth, qualities that man can contact. Among them are:

-Metis who was swallowed by Zeus and gave birth to Athena. She represents supreme wisdom.

-Styx, the river of the underground world, the divine force that puts everything back in the right order.

-Tyche which represents the divine plan and Electra, the divine light.

-Perseis, the transformation, and Pleione who fills (the chasm between the Spirit and the matter).

– Dione “evolution towards union”, who is united to Tantalus “aspiration”.