Before considering the organisation of the complementary gods of Olympus, we can review the symbolism of the twelve elementary forces sustaining human evolution. 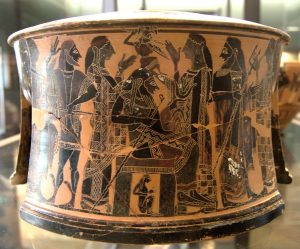 At the base, three double forces (three gods and three goddesses) establish the goals and means of the current phase of evolution.

The tree goddesses (the goals):
– Hera: the adaptation to the movement of Becoming in accordance with the divine order, ensuring that nothing is left behind.
– Hestia: the progressive realisation of a perfect equality which guarantees the growth of the inner sacred fire, Agni.
– Demeter: the realisation of union, ultimately within the body.

The three gods (the means)
– Zeus: the indefinite expansion of consciousness.
– Poseidon: the abolition of the ego through the purification of the subconscious.
– Hades: the victory over death through the unity of spirit and matter. As this victory was formerly considered to belong to a distant future Hades was not placed amongst the gods of Olympus, for the seeker could not consciously adhere to the corresponding work.

As Zeus belonged to the supraconscient he needed a delegate within human consciousness, a role taken up by his daughter Athena, ‘the inner master’.
He stands above the opposition of contraries at the limit of duality, and thus integrates within himself the construction and destruction of the forms submitted to this duality, represented by his two sons Ares and Hephaestus.
The ultimate goal of his work is Love in evolution, symbolised by Aphrodite who was born of his union with the Oceanide Dione.
To reach this goal, he supports himself on two conditions which he generates:
In the true heart, the forces which work towards the construction of the psychic being through the true light and will, Apollo and Artemis. The necessary work of purification and liberation is developed in the genealogical branch of the Titan Oceanus.
Within the mind, the ascension of the planes till the gnosis of the overmind symbolised by Hermes, the last god to arrive on Olympus.

Each force is all the more efficient when it is faced with an opposing or complementary force. For instance, an emotional storm generated by the subconscious, Poseidon, calls for an integration of consciousness and a new unity, Demeter. The obstacles are then no longer considered to restrain evolution, but are understood as opportunities.
The organisation of the couples into pairs is confirmed by the fact that according to Pindar, there was in Olympus a place of worship with six altars, one of which was dedicated to Cronos and Rhea.

On Diagram 18 we can see that Ares has been placed before Aphrodite although they are only lovers and Athena before Hephaestus, the legitimate husband of Aphrodite. This arrangement is in agreement with what has been said about humankind in its current stage: the necessary evolution of love through the destruction of forms, and the rejection, within the frame of a sincere search, of intellectual forms as completely reliable.

As a couple Zeus and Hera represents the principle of the expansion of consciousness and of the complementary power of limitation which ensures a progressive integration. It could also be considered as the necessary in-between of self and non-self which is the motor force of evolution.

The lovers Aphrodite and Ares express a temporary union, present as long as the evolution of the form destined to be a manifestation of Love needs to be destroyed to avoid its crystallisation. When forms will become supple enough to adapt to the movement of becoming, Hephaestus will be again paired with his legitimate spouse Aphrodite, and with this couple a supple and evolutionary form will become an expression of Love.
This couple teaches us detachment in relation to forms, no matter what they may be, so that we may joyfully accept the transformation of all domains, including that of our own mental, vital and physical forms and of death as an evolutionary process. Most of all, they teach us to become more supple in our nature.

As a couple, Demeter and Poseidon invite us to become conscious of the subliminal self, the conscious self being only the visible tip of the iceberg. What is subliminal and unconscious is just as important for our evolution as our conscious aspects represented by Demeter.
In other words, a part of ourselves that is unconscious and in contact with completely unknown cosmic forces also works towards our evolution. It is as if man was being worked upon both from above by the call of the Spirit, and from below by the aspiration of Matter for perfection. This double call requires him to progressively find his place in the universe so as to establish a link between Spirit and Matter. Evolution would be much slower if man had to only rely on his own powers alone to evolve: we are therefore invited to trust in the action of the Absolute which operates in the swiftest and most appropriate way for each individual.
This couple is the one to lead us towards the realisation of Union, towards maintaining the difficult balance between matter and spirit to neither escape into spirit altogether, cautioning us against beliefs of paradises away from the earth, nor to escape into materialism, which makes man a slave of the dense worlds and causes him to lose sight of the divinity and of the sacred.

The couple Apollo and Artemis express the two powers of the psychic being which awaken in man, the vision of the right Truth and Action operating from a point of certitude. They represent advanced realisations in the yogic process: let us remember that Hera knows that they are to become greater gods than her own children who act on the world of forms through the power of the highest mind rather than through the power of the soul.

The pairing of Hephaestus and Athena is, just like that of Aphrodite and Ares, a temporary one: it invites us to build forms that are as pure as possible and in accordance with the growth of our inner being, including purified mental forms, purified sentiments and purified actions. This implies abandoning the forms which are no longer useful for our evolution, and expressing those which aspire to be born.
When the right time will come Athena will become the legitimate spouse of Ares, which is to say that evolution will henceforth take place through a process of adaptation and transformation of the form rather than through its destruction.

Finally, the pair Hestia and Hermes accompanies the seeker on his quest, inviting him to ‘know’ through a constant exchange between the higher and the lower, the head and the heart, and in an attitude of rectitude, aspiration, dedication and gratitude. It invites the most challenging accomplishment, the one of the gifting of oneself which is also a forgetting of oneself.
To the swiftness of Hermes, perceived as an extreme brightness by the ordinary mind, corresponds the immobility of Hestia.