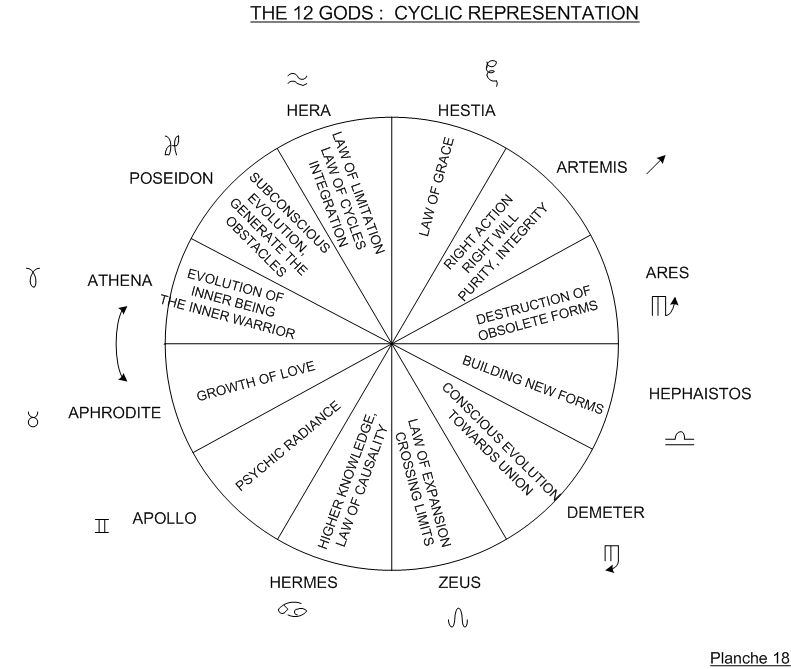 Because at this level of overmind, it is not so much couples of opposites as complementary, even if myths sometimes present them in conflict, such as Zeus and Hera.

To Zeus, symbol of the indefinite expansion of consciousness, corresponds Hera, the power of limitation which is an exact adaptation to the movement of Becoming according to divine order.

To Poseidon, the abolition of the ego by the cleaning of the subconscious, corresponds Demeter, expression of what guides towards the realization of the union.

To Hermès, the emerging force which leads towards the manifestation of the overmind in humanity, source of Knowledge, corresponds Hestia, the aspiration, the law of Grace which helps in the progressive realization of a perfect equality which guarantees the growth of the inner fire, Agni, the sacred fire.

Leto’s children, Apollo and Artemis, are face to face, expressing the two powers of the psychic being that awaken in man, the vision of Truth and the Righteous Act.

The last four gods are not yet positioned in their final place. Even if Aphrodite, an expression of evolving love, is married to Hephaestus, the source of new forms, she is currently the partner of her lover Ares, the force of forms renewal. Because, to progress, love still needs the process of destruction of forms, humanity being not yet ready for their transformation without the need for destruction.

It is therefore Athena, the symbol of the inner master who leads man towards the improvement and mastery of his outer being, which is currently positioned opposite Hephaestus.