Artemis, twin sister of Apollo, is the power of the overmind that watches over the growth of integrity, of the enlightened will. 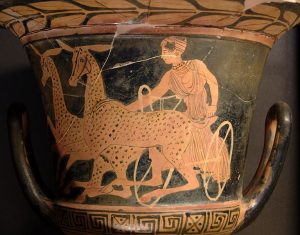 Artemis in a chariot drawn by hinds – Louvre Museum

Artemis is the twin sister of Apollo. She represents the feminine aspect of the force of light and truth that leads man towards the contact and union with the psychic, and which will then open the door to the world of spirit and allow the descent of the latter into the inferior planes, preparing the process of transformation. She can therefore never be truly separated from her brother. Hence their birth as twins, for there is no duality at the level of the psychic being and they only represent different aspects of a same unity. While Apollo is the illuminating power of the soul, Artemis is the force responsible for making integrity grow. She is the ‘will of the soul’ or ‘the illuminated will’.

When the seeker is ready she also manifests through an impulse of the supraconscient, for she is a daughter of Zeus. She is the power which knows what must be done and does it with certainty and a unified will.
This power of action is not the mobilisation of the will in the vital, which always includes an aspect of rigidity due to the existing conflicts between the different parts of our being, but rather an inflexible will and a full determination reaching for its goal.
The symbols for this will that mobilises the entire being are the bow and the quiver.
Along with her twin, Artemis manifests the highest form of freedom: not the free license which allows the ego to do as it wishes which constitutes the modern claim to the right of ‘being oneself’, but rather the submission of the outer being to the inner being.
There are two major phases of ‘liberation’ in the yogic process: the liberation of the spirit from its subjection to nature, and then the liberation of Nature and of it processes. But we can also consider a mental liberation which frees us from our attachments to ideas, prejudices, opinions and other mental preferences, and a vital liberation which frees us from our dependence to the senses, passions, vital movements, emotional attachments and vital preferences, and finally from the hold of any desire.
But the physical liberation which frees from the hold of the so-called laws of the body such as illness and death seems to be beyond the domain of Artemis. Mother stated that she had to put her psychic being ‘under the bushel’ when she embarked upon the yoga of the cells.

Artemis is therefore the inflexible will of the psychic being, for the ‘action’ which she spurs exists beyond the presence of doubt.
This unmixed will does not tolerate a tepidity of feeling. It acts indifferently on its own account when it has suffered offence, when a hero forgets his honour, or as an armed hand of the other gods when it becomes necessary from the point of view of the psychic being.

For instance she dismissed from her group of followers, or it is even said shot to death with her arrows, Callisto when the latter was impregnated by Zeus. As the nymph had taken the oath of virginity, Zeus had had to use trickery to reach his ends. In the most ancient version of the myth, Artemis acted under the instigation of Hera, who angrily persecuted all of Zeus’ lovers. (Let us remember that Hera represents the movement which limits and slows the evolutionary tendency of Zeus to ensure that everything moves forward as a whole.) All the same, the god managed to remove his son, the little Arcas, from the watchful eye of his mother.
Callisto, ‘the most beautiful’, and from the composition of her name (καλλι+ΣΤ) ‘beautiful rectitude’, is a nymph from Arcadia, the population of which considered itself to be the oldest in Greece. This myth therefore describes a general process at the beginning of the path: when the summit of a certain phase is attained, its ‘most beautiful height’, the supraconscient imposes an evolution which seems like a fall, for it implies an abandonment of the preceding state symbolised by the death of Callisto. But it is with the aim of putting into place ‘a right movement of the opening of consciousness’ represented by Arcas.

Like her brother Apollo, Artemis does not undergo fluctuating states of being. She cannot be wheedled into anything as she has no need to please, and cannot change her mind as she acts within the seeker free from all fear and doubt.
But despite her intransigence she is not a warrior goddess, for she is beyond duality. She can therefore not take part in warfare, and consequently we never see her intervene in the Trojan War.
As a huntress she ferrets out and chases after the wild beasts of the mountains and of every other region of the lower vital functions which perturb the growth of the psychic being, for she is concerned with the stages of its development in all domains.
She is accompanied by her animal symbol, the stag, which by its antlers symbolises a receptivity to the orders of the sky, and in many traditions symbolises the dawning light.
The fact that her hunting territory extends till the mountains of Taygetus is a sign that the disturbances of the lower vital can continue up till very advanced stages of development, and what is lowest can only be efficiently put under attack by what is highest. In fact, in the sequence of the Pleiades who characterise stages of growth in the mental plane, Taygete is the before-last level and the symbol of the intuitive mind.

Finally, as the psychic being is associated with what is New, she watches over its emergence and protects its growth. She is also involved in childbirth (locheia), and raises young children (kourotrophos).

Her name can be likened to the word ‘artemia, αρτεμια’, which means ‘integrity’, characteristic of one who does not accept any compromise, or who evokes, with αρτ(υω)+Μ, a ‘just submission’; she invites one to reject complaisance in regards to oneself, and to orient all of one’s energy in the same direction.

The goddess’ favourite hunting grounds are the wild mountains, sites of an aspiration to purify the evolutionary depths of Nature.

While Apollo is ‘radiating light’, Artemis is ‘integrity’, and guides us in making a progressive transfer of the will of the ego towards that of the psychic being, the soul. She is a permanent invitation to listen to, contact and follow the psychic being.
This will does not support the patterns of ‘yes, but…’ or any tepidity of commitment. She demands ‘integrity’, which is to say that all the parts of the being must give their agreement and support the new direction. She is the symbol of the ‘act’, the ‘action’ which is the opposite of ‘doing’.