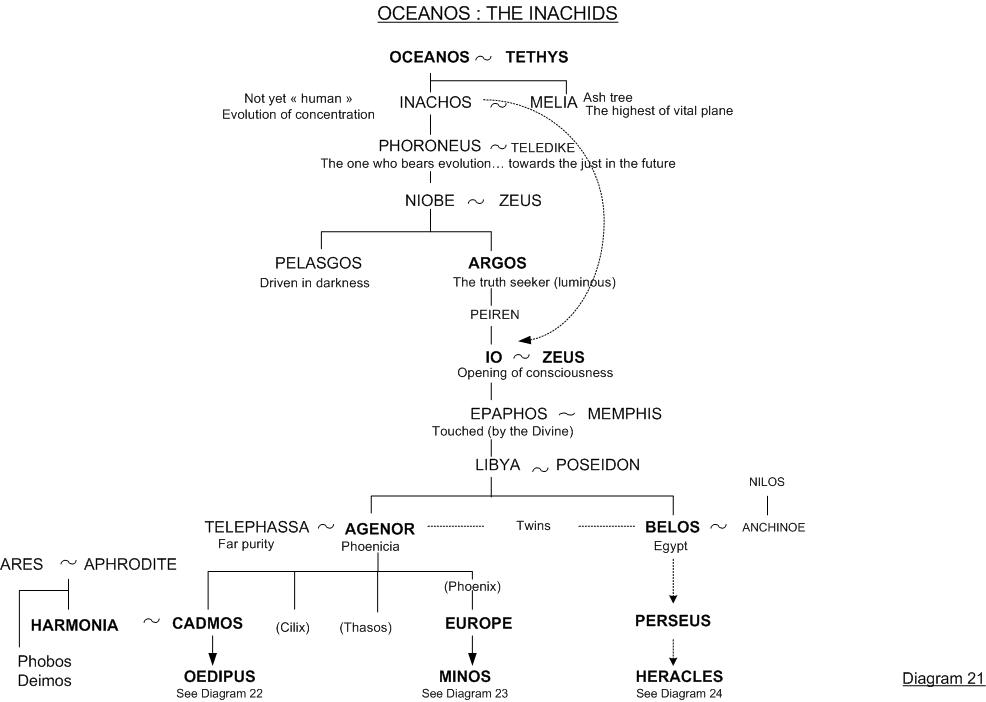 This page presents the main line from the Titan Oceanos and therefore concerns the purification / liberation process.

A general description of the first generations of this lineage corresponding to the family tree appearing above is given on the page “PERSEUS AND THE GORGON MEDUSA; INTRODUCTION TO THE FIRST SIX LABOURS OF HERACLES“.

The study of the lines from Agenor (those of Cadmus and that of Europa) as well as the study of the Labours of Heracles appear in the pages indicated in the summary under the tab “Greek myths interpretation”.

Inachus embodies “the evolution of the process of concentration or of bringing together the different parts of the being” around the psychic being. For the Ancients, the man who has not yet really started to “gather” himself is similar to Inachus, the one who according to the legend “is not yet human”.

His son Phoroneus “the one who carries evolution” is therefore reputed to have gathered the first inhabitants of the future Argos, confirming the impetus launched by his father Inachus.

Phoroneus had a daughter Niobe “the embodiment of the evolving consciousness”. She was called “the first woman”, “the mother of all living” because she was the first mortal woman to have had a child of Zeus, thus manifesting the first influence of the overmind in humanity opening on a new evolution. His son Argos “the bright one” embodies the seeker’s aspiration for purification and therefore the entry on the path.

Io, the daughter of Argos, symbolizes “the consciousness that is embodied” because of the “gathering of being” in the incarnation. This attracts a response from the higher planes (Zeus). Io was called by the ancients “the daughter of Inachus”: indeed, many ancient authors did not mention the intermediate generations. From Zeus, she had a son, Epaphos, the one who receives “the” touch “of the Absolute.

Epaphos married Memphis. The introduction of Egyptian names into the family tree establishes a connection between the Greek and Egyptian spiritualities. Greek initiates presumably assumed that the first experiences of psychic opening took place in Egypt. For them, Epaphos was indeed the great founder of the cities of primitive Egypt, that is to say at the origin of “coherent constructions” of spiritual or evolutionary principles.

It would also seem that from Epaphos, the different characters, either by name or by their place of residence, indicate the regions through which spirituality spread and progressed: Egypt, Libya, Phoenicia, Crete, Greece.

After Libya, daughter of Epaphos, the Inachids tree divides into two branches.

The first branch comes from Agenor “courageous, heroic” or “the thrust of evolution”. He married Telephassa, “the dove in the distance” symbol of peace and especially of purity in the sense of “unmixed”. The myths of this branch – those of Oedipus and the wars of Thebes – Europa and the Minotaur – expose the progress of the work of purification in the aspect of the experiences encountered by the seeker.

The other branch, that of Belos, is more theoretical. The corresponding myths illustrate the victory over fear and the conditions of liberation with the Labours of Heracles.