THE CHILDREN OF TYPHON AND ECHIDNA

Typhon symbol of ignorance, united with Echidna “the viper”, the perverted force of evolution, and begot four great monsters: Orthros, Cerberus, the Lernaean Hydra and the Chimera which represent the lie, the guardian of mortality, the desire and the illusion 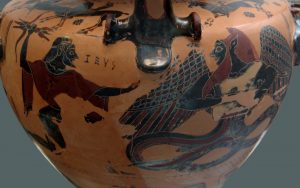 Hesiod identifies Echidna as a daughter of Phorcys and Ceto, which pinpoints the origin of this deviance at the time of the formation of the animal sense of self, animal ego. But she really only becomes a “perverse” force in man when she is united with Typhon, which is to say when the reflective mind of man is forming.
When the evolutionary force is “right or just”, the myths describe a snake rather than specifically a viper.
According to Apollodorus she is a daughter of Tartarus and as such she is like Typhon an outcome of Nescience. However this account of parentage does not indicate the moment in which the opposing forces come into conflict.
We have already come across the children of this terrible couple which brought about the Fall of Life when we discussed the children of Phorcys and Ceto: the dog Orthros, Cerberus, the Lernaean Hydra and the Chimera. They are shown to be increasingly formidable obstacles as the seeker advances on his path.
In the Questions and Answers from the 9th of January 1957, The Mother explained that the arrest of evolution within a state of union is an accident of evolution: “If Delight had remained Delight, conceived as Delight, and everything had come about in Delight and Union instead of in division, there would never have been any need for the divine Consciousness to plunge into the inconscient as Love.”

It is the two-headed dog of Geryon. The latter is the son of Chrysaor, “the man of the double-edged golden sword” who appeared, like the horse Pegasus, when Perseus severed the head of the Gorgon Medusa. Geryon is therefore a symbol of the wealth of the “true vital” liberated by the victory over fear. This is why “the cattle of his flocks were crimson”: they are representative of the divine powers of life.
Scribes have made corrections in the manuscripts, interchanging the names Orthros and Orthos so that it is now quite difficult to ascertain which name was originally used by each author.
If we keep the less likely spelling “Orthos”, the name means “upright, not deviated, straight”, which can then mean “truth” (otherwise his murder would evidently not be necessary), but in any case it would only point to a transitory truth which must be surpassed at the right time. In that case this monster stands for the “established truths” which seem unreal or even false to the adventurers of consciousness, particularly the physical laws such as that of the senses, of illness or even of death.
If we consider the other much more probable spelling, Orthros, (with the Rho P used in its inverted sense), this name can mean, according to dictionary definitions, “he who is present since dawn”, or “the opposite of truth; falsehood, fundamental insincerity”, which is to say everything which distances from a unity with Reality.
At a very advanced stage of yoga however, the adventurer realises that a minuscule movement of consciousness is sufficient to take him from the world of Truth to its opposite, which explains the closeness of use of these two names, Orthos and Orthros, as well as perhaps the depiction of Orthros as having two heads.
We will encounter Geryon in the study of the tenth labour of Heracles. He is a monster with three heads and three bodies, one of which is winged, and who can be associated to the three modes of nature or guna. Transcending them was traditionally considered to be impossible. In fact, according to the initiates of ancient times, all action belonged to their play and their state of perfect equilibrium automatically pulled the seeker into immobility and the arrest of action. A quietist liberation could be obtained by imposing an enlightened inertia, or tamas, on the external nature.
This is why Heracles raised the famous “Pillars” which mark to the west the borders of the inhabited earth at the outermost limits of Lybia and Europe, even before having reached the den of Geryon. According to the ancient Greek initiates it was an extreme limit beyond which no seeker could aspire to go.
The tenth labour was therefore only a prediction of the future progress of yoga.
Before vanquishing Orthros, Heracles had to immobilise Nereus: in other words he had to master the most archaic movements at the root of life.
Orthros can therefore be considered to be a fundamental perversion introduced by ignorance and separative consciousness at the root of life.

Orthros begot two more monsters with his own mother Echidna, consequences of this perversion, and they can also explain the two heads of Orthros. In Hesiod’s text, the two monsters are sons of Chimera and of the dog Orthros, which amounts to the same thing.
Phix, or the Sphinge, which Oedipus will have to confront, symbol of perverted wisdom and of falsehood disguised as truth. His name indicates a receptivity misshapen by the mind. The Greeks knew of the Egyptian sphinx, symbol of true wisdom, as the androsphinx/ ανδροσφιγξ.
The Nemean Lion, symbol of the egotistical pride which remains present even into the state of saintliness – Nemea, where the lion dwells, can in fact be understood as the consecration into surrender N+M – which prevents integral consecration, the extermination of which will be the aim of the first labour of Heracles.

This is the frightful dog with multiple heads (two, three, or, according to some, fifty or even a hundred), which welcomes the “shadows” when they enter the underground world, the kingdom of Hades, and stops them from leaving it again. On his back are raised a multitude of serpent’s heads and his tail is also that of a snake.

The role of Cerberus is therefore to block the continuity of consciousness through the veil which we call death. He conceals the true reality of death so that it appears to be a negation of life and a proof of its supposed failure.
He is therefore the first guardian of “immortality”, the secret sought by the ancient initiates, which is integral non-duality, not only in the spirit but also in the vital and in the body (a victory over death not signifying an eternal body but rather a state of matter submitted to consciousness).
His name could signify “the principle of incarnation of death”, or, through its character structure, “the opening of consciousness to the exact process of incarnation (+) “.
Man is called to overcome this negation of life not only by fulfilling the continuity of consciousness beyond birth and death, but also by transforming the rigidity of corporeal matter to render it sufficiently flexible so that it may one day be ready to be shaped by supramental consciousness.
This is not a new idea, but it finds a beginning to its fulfillment with the discovery of the possibility for the transformation of cellular consciousness.
Heracles will descend into Hades in search of Cerberus, not with the intention of killing him as he is not permitted to do so, but to raise him towards the light (consciousness), which is to say to understand the exact process and meaning of death and of unity within the realm of matter.
His fifty heads indicate that he is fully active in the world of forms, and stands guard over all its exits.
He does not allow the soul to exit from Hades, because anything that has reached essential unity in the realm of matter cannot fall into duality again.
Only Persephone, Hades’ wife, can travel between the two worlds as she is the one who has accomplished “the murder of destruction”.

This monster inhabits the marshes, and so operates from the lowest vital plane. It is endowed with a number of heads which grow back as soon as they are severed, and from their mouths comes forth a lethal breath.
It symbolises desire or lust and the attachment resulting from the illusion of separation, as well as the suffering that this causes.
The moment we satisfy a desire, another one arises to fill its place. The moment we have ended a suffering caused by lack, another reason for suffering arises.
Hydra is therefore the negation of joy.
In the second labour of Heracles she is assisted by a giant crab, symbol of “seizing” or of “the primordial movement of capture” that wishes to catch hold of what it does not think it possesses.

The fourth child of Typhon in Chimera, symbol of the illusion resulting from separation. She has the upper body of a lion, the abdomen of a goat and the lower body of a snake, and one head of each of these animals. She therefore symbolises what is highest in vital aspiration, full of goodwill and sensitivity to evolution but with an orientation twisted by the ego (lion).
Her name most commonly designates a young goat, but its meaning must instead be interpreted from the character khi (Χ), namely “the arrest of instinct/intuition”.
The most serious of all illusions is probably the one which rages in the field of spiritual search. To defeat it a purified vital (the horse Pegasus) and a powerful discerning mind (the hero Bellerophon) are needed.
Homer reminds us that through her parentage she is “of divine race”, which is to say that she represents an inescapable evolutionary process.

Thus, falsehood insidiously substitutes Truth, Life is covered up by the mask of death, desire and suffering annihilated Joy and nascent consciousness is perverted by illusion.
Zeus, identified with Metis and victorious over the Titans, imposed mental consciousness on humanity. Although defeated, Typhon is not any less active even though he is no longer “visible” to consciousness: his children, stemming from ignorance, will act for him henceforth.