The Lernaean Hydra that Heracles must overcome during his second labour symbolizes the victory over desire and the primary movements of appropriation. 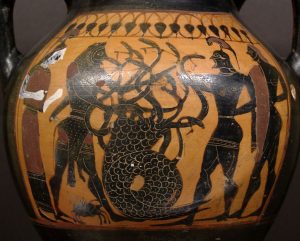 After the test of the Nemean Lion, Eurystheus ordered the hero to kill the Lernaean Hydra.

The Hydra was a giant water snake, born of Echidna and Typhon, who lived in the marshes near the Amymone springs and ravaged the surrounding country. It had a large number of heads (six to fifty depending on the sources). Hera is said to have raised the snake.
In order to force the Hydra out of the marsh, Heracles used flaming arrows before seizing her firmly. While the monster hugged one of his legs, Hera sent a giant crab that pinched his foot. Heracles then had to ask for the help of his nephew Iolaus.
The hero first crushed the crab with his foot, then managed to defeat the Hydra, while Iolaos burned the necks at their roots when the heads were cut off to avoid them to grow again.
Then he rubbed the tip of his arrows with the blood of the monster which was a powerful poison. This venom caused the death of the Centaur Nessus much later. The latter gave Dejanira a little of his blood poisoned by the venom before dying.
Later, she would dip a tunic in the poisoned blood and give it to Heracles in revenge for his infidelity, causing his death.
Eurystheus refused to recognise this labour, arguing that Heracles had not accomplished it alone.

We have observed the difficulty of matching primordial movements of life with different monsters while studying the Gorgon, especially as Hesiod and Homer do not agree on genealogies. We also mentioned that between the two, Homer was the one whose accounts fit best with the experience, while those of Hesiod involve more metaphysical notions.
According to Homer, Typhon “the ignorance” (from whom the four major monsters Orthrus, Cerberus, the Hydra and the Chimera were born) is a son of Hera, and her children are unquestionably linked to human consciousness. For Hesiod, however, Typhon is from Tartarus “the Nescience” making “ignorance” an original principle.

Just like there are two representative symbols of the ego, the lion of Cithaeron which only relates to its surface manifestations and the Nemean lion who plunged to its roots, there are also two levels of representation for the twisted life energy: the Gorgon Medusa and the Hydra, of which we will mention here a few elements discussed earlier in the myth of Perseus.

The symbolism of the Gorgon is ambiguous depending on whether one considers the iconographic sources or affiliations given by Hesiod; Homer unfortunately gave no indications concerning her genealogy. According to the iconography, she has a human form and her head is covered with snakes. She should therefore be considered as the symbol for the influence of archaic evolutionary processes over the human mind, that is to say doubt and mental fears. She would therefore be logically located downstream in the genealogy of the Hydra. But as for Hesiod she is the daughter of Phorcys and Ceto, she appears during the constitution of the animal me and thus symbolizes deviations at the root of animal life.
It is this filiation that we have finally chosen as being the most consistent with the rest.

We therefore considered the Hydra as a purely human deviation.
Note that she is for Hesiod one of the four children of Typhon ““what dissimulates, what blinds” – ignorance – and Echidna “which stops the process of evolution in the union”. She is then a product of ignorance and of a separated consciousness, the symbol of a “twisted” consciousness-energy which along with three other monsters (Orthrus “lying” Chimera “illusion” and Cerberus “sense of separation in the body”) leads us to think we are isolated from nature, others and the Divine.
She manifests herself in many forms, the most apparent one being desire and the more archaic being the lack of sensation.

She is always represented as a huge erect snake with multiple heads, that is to say, manifested in multiple forms that are independent from each other. She evokes what emerges from the depths of the being and roots itself in the most archaic layers of the human mind, the “physical mind”, because she feeds in the marshes, on the border of life and body.

It is a perverted evolutionary power that expresses itself in man in many ways, the most obvious one being desire. It was at Lerna, “the place of desire”, that Zeus met some of his lovers.
To discern within oneself what is the product of desire (or of the will of the ego) from what is the product of the essential will (that which comes from the psychic being which supports the surface being) is one of the challenges of this labour. When the seeker feels uncertainty, it seems that the choice that the ego faces is accompanied, even weakly so, by a mental-vital excitement, insistence, a projection on the outside and a certain impatience or restlessness. The psychic choice conversely is associated with peace, tranquility and planning without impatience.
Within the Hydra lie the roots of guilt, shame and mental fears.

If we have linked guilt to the manifestations of the Hydra and not those of the Gorgon, it is because it appears, to the elders and to contemporary scientists, that the Hydra intervenes at the birth of the human ego and not at the root of the animal me. This feeling is in fact always linked to that of a moral transgression.
Shame is also a human feeling although it takes its roots in the archaic behaviour of animal submission. The latter is required to maintain group cohesion and this is perhaps why the Gorgons were portrayed by some authors as “beautiful girls” before they became monsters.
Guilt and shame are instinctive attempts to deny separation from the Unity or from the group. One could extend this study by introducing what appears to be a particularly sensitivity to shame for the Orientals and a sensitivity to guilt for the westerners.
Genesis, which deals with the entry into discernment by developing a reflexive consciousness, makes both shame and guilt appear simultaneously: “I was afraid because I was naked, and I hid”, said Adam.

The event takes place in Lerna this time, the city opposite to Nemea compared to Argos. This is thus the exact complementary labour to that of the fight against the ego. The four other labours located in the Peloponnese will only be the development of the first two.
If the first labour concerns deformations of the evolution tending towards individuation (even including spiritual pride if we count Phix, the sister of the Nemean lion), the second aims at disturbances that occurred at the roots of human evolution.

According to some, the only way to permanently break free from the Hydra (word whose structuring letters ΔΡ express the overthrowing of the process of union) is through cauterisation by spiritual fire.

According to Apollodorus, this hydra lived near the Amymone “impeccable” springs, indicating a close proximity between the real movement and the one who is perverted. At a certain depth, just a tiny shift in consciousness is enough to go from one to the other.

This author is also the only one to mention the existence of an immortal head, which then would be the only desire that cannot cease because it belongs to the unity, the “desire” of the Divine. The hero buried her underground on the road from Lerna to Elaious – from the place of desire and suffering to that of “free consciousness-existence Λ + Ι” – and placed a heavy rock over her.
When the seeker is able to eliminate all the heads of the Hydra, he tears the root of desire and enter a state without ego and without desire. He can then resume his essential quest for freedom.

The blood of the Hydra is a particularly violent poison with which Heracles rubbed the ends of his arrows.
In one version of the hero’s death – that of Sophocles – this led to his downfall. In fact, his second wife Deianeira “detachment” presented him with a tunic smeared with the blood of the Centaur Nessus. This blood was poisoned by the Hydra because the hero had pierced the Centaur with one of his arrows. The blood of the Hydra represents the “essence” of desire. It is the symbol of the lack for what is essential, of separation. Mixed with the blood of the Centaur Nessus, it creates a poison which is universal desire instead of universal love (the part of the seeker not yet purified impregnated with the poison of desire). In fact, Nessus is the symbol of the highest human achievement supported by the vital, but still imperfectly purified.

From the earliest representations, the crab appears alongside the Hydra. It also represents an element of human consciousness as it was sent by Hera. His death precedes that of the Hydra. He is a manifestation of the same perverted energy. He is the symbol of the primordial movement of “seizing” of the ego that is built at the beginning by the movement of appropriation in relation to the outside. The ego wants to spontaneously take what he believes he does not possess, thinking this will replace what it misses.
Moreover, what the crab has seized in one of his claws can only be removed by removing his pincer, indicating a very strong attachment.
According to Buddhism, grasping and attachment are the causes of suffering.

To defeat the crab, the hero called Iolaos “the voice or vision of consciousness” for help. If the seeker who applies “the right move” could become aware of desires, attachments, sufferings, etc. (after Heracles had ousted the Hydra from her den) he must call upon spiritual discernment to eradicate “grasping” (even proceeding, according to Apollodorus, to prior purification of the vital environment: Iolaos ignited the surrounding woods).

There may be several reasons why Eurystheus refused to recognise this work.
The first would be following a disagreement between the initiates about the number of labours to retain in the canonical list.
Perhaps too many of them refused to consider the fight against desire to be the basis of yoga. It is in fact extremely difficult in the beginning to separate what belongs to a wrong movement of the ego from what is required for the construction of the personality. And even in the case of a wrong movement, it may well have a reason and might be critical to the growth of the psychic being, which is often more favored by mistakes than by virtues.
On the other hand, there is always a risk of completely killing the life energy by wanting to annihilate only desire. Initiates have in fact always warned the disciples against excess, including in the fight against desire that often only leads to a strengthening of the ego by poorly conducted asceticism. In fact, it is against the satisfaction of desire that the novice seeker usually fights against and not the desire itself. But the repression of the satisfaction of desire, instead of deleting it, increases its power. This is probably why some said that two heads grew back when the hero got rid of one.