Hestia is the force of aspiration and rectitude. It calls for refuse of compromises, for purity (everything in its right place) and sincerity.

Hestia is the firstborn of the six children of the Titan Cronos, but the last one whom he regurgitates. Her function is to watch over the sacred fire. She is also the goddess of hearth and home or more precisely of the fire-place, always situated at the centre of houses in ancient Greece. She is the goddess who is honoured and invoked by every family at the beginning of each ritual. 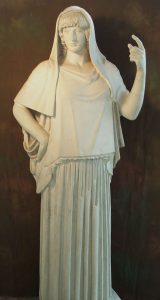 Hestia never changes place, which is why she does not appear in any of the heroic adventures.
Amongst the gods she holds a privileged place which even Zeus, usually possessive of his supremacy, respects. She was courted by Apollo and Poseidon, but rejected both of their attentions and is eternally a virgin.

As the home is a representation of the inner space, Hestia resides at the centre of our being. She is not the fire itself, but the presence that watches over it.
Fire, or light, originates from another plane, that of the Titan Koios, and manifests itself through his grandson Apollo, an expression of the psychic being on the plane of mental consciousness. Hestia herself is therefore not a manifestation of the psychic being, which is formed by the soul, the divine spark within each individual, but is a force of aspiration which keeps alive the inner fire, the first tangible manifestation of the psychic being. If there is a lag in striving or there is no aspiration, the fire dies down or is covered by ashes and slag.

As a sister of Zeus, Hestia belongs to the highest plane of human consciousness.
This aspiration is present throughout the planes, is born in the deepest part of oneself often in an almost imperceptible way and does not impose itself. It stimulates growth and the surpassing of oneself. In a paradoxical way, it is most often situations of suffocation or oppression that favor its emergence. This is not a ‘desire’, which is a movement of the ego aiming to satisfy a lack through a movement of possession, but rather a call, an essential need.
At the beginning of the path this aspiration seems to be translated by a slight feeling of unease, often even a rejection of the world, because the seeker knows what he does not want but does not yet know where he is going. This lack of knowledge about the true nature of the unease can lead to erroneous paths.
Even if the seeker has understood that the first goal towards which this growing fire pulls him is the discovery of the inner reality, it will be very difficult for him to orient himself as long as he has not established contact at least once.

There is therefore a lengthy work of ordering and cleaning to prepare the groundwork in which Hestia participates, as can be seen in the structuring characters of her name, ΣΤ (ST with English letters which formed for instance “to stand”), which denote the current of consciousness tending upwards as well as a certain kind of rectitude.

The first manifestation of Hestia is probably the call of the ideal. For a long time, this highest idea which we can hold is the guide of the inner journey. It occurs until the seeker is sufficiently conscious of his inner being and until the latter becomes the captain of the ship, taking control over the lesser personality in all its movements, feelings and thoughts. The inner being is the ‘psychic being’ which the ancient Greeks knew as ‘psyche’.
It is not a matter of an escape into the dream realm to avoid facing what is real, but rather an aspiration for something more noble, beautiful and true, or whatever is specific to each individual seeker which will enable him to confront his thoughts, words and feelings and each of his acts.

Hestia, aspiration, is in affinity with fire, the symbolic nature of which is purification.
This is why Zeus has accorded her the right of remaining eternally virginal and chaste: in her case, there can be no mixing. It is therefore to a path of purification which she invites us, a purification in the sense of a putting in order with each thing in its rightful place, and not in the sense of any particular virtue.
The ancient Greeks also invoked her as ‘Divine Hestia, who never ceases to watch over the sacred dwelling of Apollo’ (Homer, Hymn to Hestia). We will see that Apollo is at the level of mental consciousness the manifestation of this Light of Truth which resides in the temples of our souls. It is the sacred fire which more than five thousand years ago the ancient sages of the Vedic era worshiped as Agni, the ‘shadowless sun’ (Rig Veda III. 39. 5) ‘ present for man and found at the center of his home’ (Rig Veda III. 70. 2).

As the guardian of the inner temple and the sacred fire, Hestia possesses all the qualities of an unshakable guardian; she knows who she serves, and never abandons her post. Without a perfect sincerity, no one can cross the ‘doors of the temple’.
She is the opposite of the tepid aspiration which deadens the flame, but the battle is not hers to fight and will be carried out by the warrior gods Ares and Athena.
Hestia is certainly inflexible, but in response to aspiration she allows the intervention of the divine grace. Certain authors even affirm that only she has the power of transgressing the laws which direct our world, which even Zeus cannot do; grace can act even where the overmind is powerless.

This is why she faces Hermes in the circle of gods, the latter symbolising knowledge of the laws which direct out time-space. Amongst these laws is the relation of cause and effect, one of the aspects of which is the ‘karmic’ law resulting from the fact that everything has a consequence. In response to our aspiration, what can transgress these so-called ineluctable laws is the complementary power on the circle, Hestia, who calls for the intervention of Grace.

Within us, Hestia is the force of aspiration, indomitable and intransigent, source of an unresting demand for simplicity and humility, immobility and concentration.
She calls for nourishments corresponding to her: truth, beauty, harmony, peace, etc.
She incites rectitude, the avoidance of compromise, purity (‘each thing in its right place’), and sincerity.