The Arrival among the Phaeacians (Book VI)

In the past, the Phaeacians lived in Hyperia, but they were subjected to the power of the Cyclops. Thus their king Nausithous, son of Poseidon, removed them from Hyperia. He settled them in Scheria where he built and organized the city.

It was now his son Alcinous (ou Alcinoos) who reigned. The latter had united with Arete, who eased the quarrels. She had five sons, two of whom were already married, and a daughter Nausicaa whose beauty was that of an immortal.

Athena appeared to the girl in a dream in the guise of her friend, and urged her to ask her father for a carriage to go wash the laundry for her wedding, which Nausicaa “with white arms” did not fail to do as soon as she woke up.

When the laundry was done, the girl began to play ball with her maids. She fell into a waterfall and the screams of the women woke up Odysseus (Ulysses). He came out of his shelter, covering his sex with a branch, and walked towards the girls. The maids fled, but Nausicaa remained there. After hesitating for a long time about the best way to approach her to get her help, Odysseus (Ulysses) spoke to her, comparing her to Artemis and then to a palm tree he had once contemplated in Delos. He asked her for asylum and something to wear. Nausicaa in turn introduced herself, claiming that no mortal had relations with the Phaeacians. She ordered her maids with beautiful curls and white arms to bathe the hero, feed him and clothe him. But Odysseus (Ulysses), out of modesty, refused their help. When he had bathed and put on the clothes given by Nausicaa, Athena gave his hair some reflections of hyacinths.

Nausicaa, seeing him resplendent, sensed the hand of the gods in this hero “of endurance”. She offered to take him to her father, giving every instruction to enter the city discreetly. She, who until now had refused all parties, was not to give in any way to gossip. The hero had to stop in a poplar grove dedicated to Athena to let the princess enter into the city alone. Then, upon his arrival at the palace, he had to go directly to the feet of Queen Arete, who, sitting at the edge of the hearth, wrapped on her cattail the beautiful wool dyed in the purple of the sea.

Odysseus (Ulysses) did as Nausicaa said. He stopped in the poplar grove and implored Athena, who heard him but did not show herself to him.

The Phaeacians “those who allow the penetration of light” or “those who open to the light” represent the spiritual forces facilitating the transition to a higher plane, a plan that Sri Aurobindo has called ‘Supramental’.

In ancient times, these forces were established in the Supramental: Hyperia, the region of “consciousness above or beyond.” This name is similar to that of Titan Hyperion “the highest creative power” that we associated with the Supramental plane, father of Helios, Selene and Eos.

But their access depended on the adventurer’s highest “vision” abilities, which “imposed themselves” and attributed to themselves some of their manifestations (the Phaeacians had to endure the force and plundering of the Cyclops).

The opening of the Ajna Chakra (or “third eye”) which can be achieved by different methods, allows the vision of multiple planes of Reality, but does not require the total purification of the being. The ego can therefore reap the benefits of this opening.

Then the subconscious (Poseidon), working for the evolution, made these powers more accessible to the adventurer and less dependent on “vision” abilities. It somehow bridges the gap between the Supramental and the denser planes. It allowed that a capacity for “rapid progression on the path” (Nausithous “who sails fast”, son of Poseidon…) establishes a firm basis with well-established practices in order to contact the forces that give access to the Supramental (…led them to Scheria “firm land” and built the city).

On several occasions, we have mentioned that one of the essential characteristics of the adventurer of consciousness is the rapid progression on the way, the fact of never stopping for long on any realization. Mother said of herself that she was like a hurricane in her progression. Similarly, Sri Aurobindo’s Record on Yoga shows us how rapid his progress was.

But this characteristic is not enough. It also requires a “powerful mind or intelligence” (Alcinous) united to a well-established peace or equality, which authorizes the passage and makes it possible (Arete “who rises to the highest mind” who is in peace or equality because she “eases quarrels”). In other words, the completion of the two paths, the one of the ascension of the planes of consciousness and the one of purification-liberation, became necessary to access the plane of the supramental Truth.

Two realisations from this alliance are already active to facilitate this passage (two of Alcinous’ five sons are married).

Alcinous’ daughter, Nausicaa, “who walks through yoga with fire,” a symbol of a “burning need,” makes the transition for the experience. She represents the realization of a very great “transparency or purity” in the acts, which is why Odysseus (Ulysses) compares her to Artemis (her beauty is that of an immortal and she has “white arms” as well as her maids). This transparency/purity being the sign of psychic realization (right thought, right feeling, right action), Nausicaa announces therefore the future possibilities of passage through the psychic when the path of access through the mind will be closed.

Once again the inner master gives his support to the seeker, for the time is near when this burning need will find an answer (Athena presented herself to the girl in a dream in the guise of her friend, and urged her to ask her father for a carriage to go wash the laundry for her wedding).

The seeker must show great sensitivity in this transition: he must follow the movement rather than impose it (having covered his sex with a branch, (…) and after having hesitated for a long time on the best way to approach her to get her help). He reached a plane of great purity (Odysseus (Ulysses) compares Nausicaa to Artemis).

The palm tree contemplated in Delos to which the hero also compares Nausicaa may refer to a vision of the future radiation of the chakras that one can have during the first psychic contact. Swirling on themselves in the current phase, they would be destined in the future to spurt out like a fountain, like the palm tree. 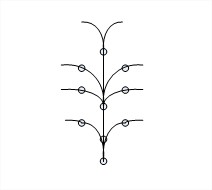 As long as the slightest trace of ego remains, that is, the slightest “feeling of being separated” even in the body, the seeker cannot make the passage (no mortal traded with the Phaeacians).

Although he feels that superior forces offer themselves for a more perfect purification, the adventurer completes this purification on his own (Odysseus (Ulysses) refuses the help of the maids with beautiful curls and white arms)

A hero of “endurance”, he is supported by the inner master who watches over the path and enables him to experience bursts of supramental consciousness (Athena gives to his hair hyacinth highlights).

During this first Supramental contact, the seeker must show total humility up to the point of experience so as not to compromise “the pursuit of the path with its burning fire” (Odysseus (Ulysses) must not show himself in the company of Nausicaa in order to avoid any risk of gossip).

The poplar marks “the door of unity.” (It seems to have been used as a symbol of the kingdom of Hades, the passage towards unity in the body). The seeker must therefore stop at this threshold and address his prayers to the inner master so that he may facilitate his access to the kingdom of Unity (Odysseus (Ulysses) implores Athena to ask for a favourable welcome from the Phaeacians).

<< Summary and Introduction : The Returns