THE LINEAGE OF MAIA: HERMES AND AUTOLYCOS

The lineages involved in the Trojan War include: the Tantalum lineage, the Trojan royal lineage, the Spartan lineage, the Maia lineage, the Deion lineage and the Asopos lineage. The lineage of Maia continues with her son the god Hermes, symbol of a force consciously active in the overmind, then Autolycos “he who walks with his own light”, and finally Anticlia . 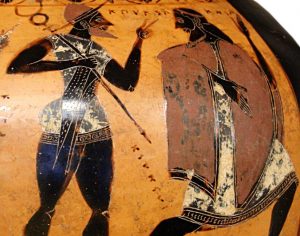 The lineage of the Pleiad Maia has already been discussed in the first volume of this work as part of the analysis of the god Hermes ( See Hermes). We will only go over the essential points here, specifying certain points which will be better understood at this stage.

Maia symbolises a ‘complete consecration’, a ‘surrender’ akin to the one defined above.
Without Hera’s knowledge, Zeus at night visited the cavern in which Maia dwelt, set apart from the other gods, and some accounts claim that Maia conceived Hermes whilst gods and men were asleep.
The Pleiades belong to the fourth divine generation, as do Athena, Aphrodite, Apollo and Artemis, but except for Maia not one of them is ever described in such a proximity to the gods. This is probably because mastery of the planes which they represent had been fully accomplished by a number of adventurers of consciousness which integrated them into the human sphere. On the other hand, the stage of the overmind only recently appeared in humankind some millions or tens of millions of years ago (Hermes was the last of the gods to arrive at Mount Olympus). It is still imperfectly explored and therefore still belongs to the supraconscient plane, the plane of the gods, the overmind (not to be confused with the supramental), which is why Maia lives isolated in a cavern despite being accepted amongst the gods.
Some say that she was the nurse of Arcas following the death of Callisto, which confirms the correspondence of Arcadia with an advanced stage of yoga.

Hermes – some points to remember

The fecundation of consciousness by the supraconscient in a state of complete consecration was carried out without any part of the seeker (or the individual within humankind) being conscious of it (Maia conceived Hermes while gods and mortals lay sleeping). In fact, the widest movements of evolution always take place in the general inconscient. Sri Aurobindo (Savitri Book I, Canto IV) announces the advent of the supramental in a similar way:
‘As a thief’s in the night shall be the covert tread
Of one who steps unseen into his house’.

Hermes therefore represents the last mental plane which can be accessed by human consciousness in a stable way, in a period preceding Homer and probably taking place even prior to ancient Egypt. It forges a link with the Supramental, Helios, which is still only perceived in brief lightening flashes (see the last labours of Heracles), or through some of its manifestations like Circe and Aeetes.
Hermes is the only god to appear in the fifth divine generation, thus making the supraconscient ‘descend’ into the human and bringing together gods and men.
As the deity of the surpassing of limits in the ascension to the world of Spirit Hermes must also allow a descent into the depths, for evolution is a process of both ascension and integration. He therefore represents a spiritual power which can lift the barriers that separate us from the deep subconscient and the corporeal inconscient. Hence his role as ‘psychopomp’, guide of psychic souls who escorts the shades of mortals into the kingdom of Hades, where takes place the reunification of Spirit and Matter.

We have also seen that the seeker who reaches the overmind at first tends to attribute to it realisations originating from the light of the psychic being, while these are only mental experiences (Hermes steals Apollo’s herds).
As the herald of the gods Hermes transmits the truth originating from the higher planes of the Spirit, but he cannot do so without causing distortions. For however high they may be, the mental planes cannot access the totality of Truth, and are certainly not able to express them at lower planes without creating distortions. Instead, through its contact with Truth through identity, the psychic being manifests itself on the mental plane in a more precise way (Apollo and Artemis).

Hermes’ characteristic elements or attributes are his Caduceus and his winged sandals.
The Caduceus is a symbol which reveals in a single simple form the widest Knowledge about human evolution and the domains of Consciousness – a few words about it will be written at the end of this work.
The winged sandals allow a very swift progress along the path without being halted for long months or years by various obstacles. They also grant access to the highest worlds of the Spirit.

The children of Hermes

The most well known of Hermes’ children is Autolycos, ‘he who is his own light’, borne by Philonis, ‘she who loves evolution’, herself the daughter of Deion, the youngest of Aeolus’ children. Free of any external reference, this expression of the overmind sometimes attributes to itself realisations which are not its own. This is why Autolycos is sometimes described as the greatest of thieves, more skilled than even his father.
He is Ulysses’ grandfather. He entered into a union with Amphithea, ‘all which concerns the inner divine’, and with her engendered a daughter named Anticlia, ‘humility’, as well as several sons. Anticlia entered into a union with Laertes, ‘the complete engagement of the unified being’, and by him bore Ulysses. Only Hyginus places Laertes within the lineage of Deion.

Some of Hermes’ other children have been previously mentioned in this work, including Abderos, the companion of Heracles, Eurytus the Argonaut and Cephalus, all of them representing different impulses of the nascent overmind.