Leto, the Fates and the Muses – Family tree 5 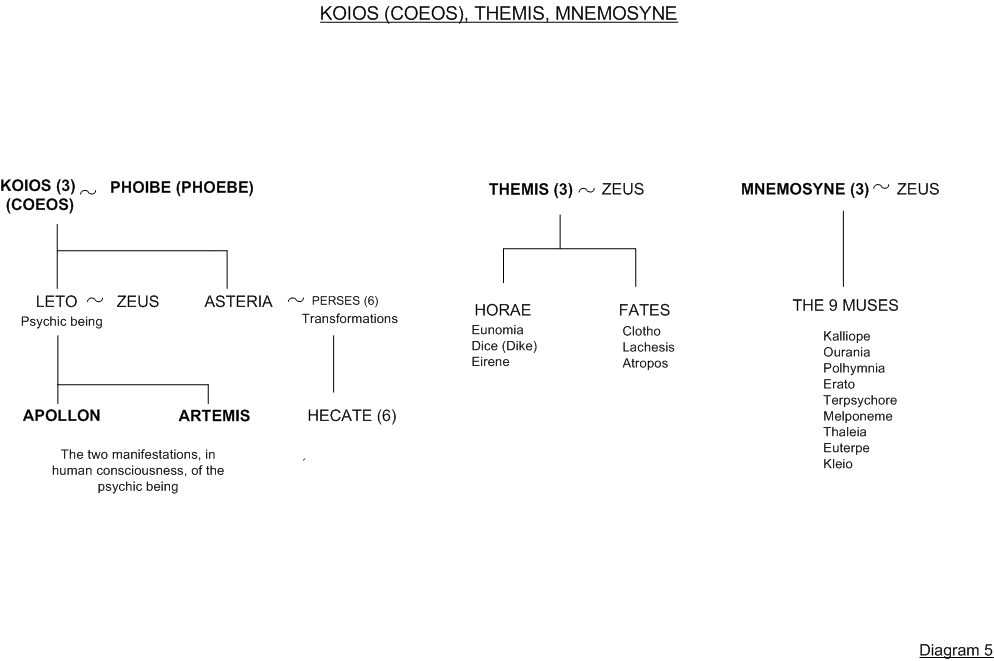 The family tree represented above includes not only the descendants of the Titan Koios (see the page COEUS: LETO AND ASTERIA), but also that of two Titanides who are united not to a Titan but to Zeus (see the ZEUS page). Indeed, the powers corresponding to these two Titanides can only be active in humanity when it has accomplished what their children – the Horae, the Moirai and the Muses – represent.

Koios engendered Leto, symbol of “the highest individuation, what we called following Sri Aurobindo” the psychic being “, this subtle body which is gradually constituted around the soul, the divine spark, and which, as reincarnations progress, must gather around him the other bodies – mental, vital, and physical – in order to achieve a fully individualized divine being on earth.

From his union with Zeus, Leto had two children, Apollo and Artemis, who represent respectively “an illuminating power” and a “realizing will”, not the will of the ego which is stiffening, but the will which is a tension of the soul towards the goal.

Asteria, the couple’s second child, symbolizes countless flashes of light generated by her union with Perses who is working on the transformation process. These flashes of light help the growth of the psychic being.

The Titanide Themis represents the “divine law and order” presiding over all things. She holds the art of prophecy which knows “in Truth”. She was after Métis the second wife of Zeus with whom she conceived:

-The Horae: Eirene (Peace or Serenity), Dike (Justice), and Eunomia (Order), who are in yogic terms ‘equanimity’, ‘exactitude’ and ‘purity (everything in its right place)’

-The Moirai (also known as the Parcae), the famous sisters who hold the threads of life in their hands: they are Clotho, ‘she who threads’, Lachesis, ‘destiny’, and Atropos, ‘the inflexible’;

The Titanide Mnemosyne whose name means ‘she who remembers everything at once’, symbol of the reunification obtained by a ‘complete’ rediscovered memory of the past, present and future. United to Zeus, she gave birth to the Muses, purveyors for the elders of Wisdom and of Knowledge. Hesiod only records their names which express inspiration, gratitude, joy, plenitude, harmony, the right time, the right action and the right word – in other words, that which is in agreement with the higher planes of Truth.