Coeus had with Phoebe two daughters, Leto and Asteria. The first united with Zeus and bore the two great gods Apollo and Artemis. The second united with Perseus, son of the Titan Crius, and bore the mysterious goddess Hecate. 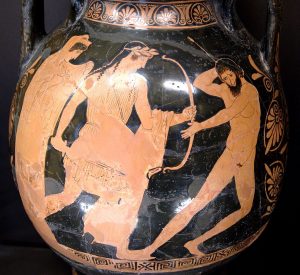 Apollo piercing with his arrows Tityos, who has tried to rape his mother Leto (standing behind Apollo) – Louvre Museum

The structuring characters of the name Coeus (Koios Κ+Ι) express a projection and opening of consciousness, and the meaning of the name of his wife Phoebe is ‘radiating splendour’.

Leto is the symbol of ‘the highest individuation, Λ+Τ’ (the points conscious of themselves), which in keeping with Sri Aurobindo’s terminology we refer to as ‘the psychic being’, the body gradually aggregating around the divine spark that is the soul. This term derives from the appropriate use of the Greek word psyche, ΨυΧη, usually translated as ‘breath, soul or spirit’, but which through its structuring characters more nearly signifies ‘the consciousness which descends and gathers itself at the center of the being’.
The summit of the supraconscient in the overmind plane working towards the highest individuation (the union of Zeus and Leto) generates an illuminating force, Apollo, and a will for realisation, Artemis, which is not a will of the ego which leads to stiffening but a straining of the soul towards its aim.
Aside from the episode of the birth of her children, the ‘divine’ Leto is not directly involved in mythology, and we will only witness her children coming to her defense. The latter massacred the children of Niobe, the daughter of Tantalus, who had numerous children and had hence claimed to be superior to Leto, who had only borne two. We will deal with this episode which establishes the preeminence of the psychic being when we discuss the ancestors of Oedipus. Apollo and Artemis also slew the giant Tityos who had tried to rape their mother (see the study on Hades).

The couple’s second child, Asteria, symbolises innumerable flashes of light generated by Perseus, destructions or transformations (see diagram 5).
Their daughter the goddess Hecate will be discussed in the section about the next Titan couple, Crius and Eurybia.