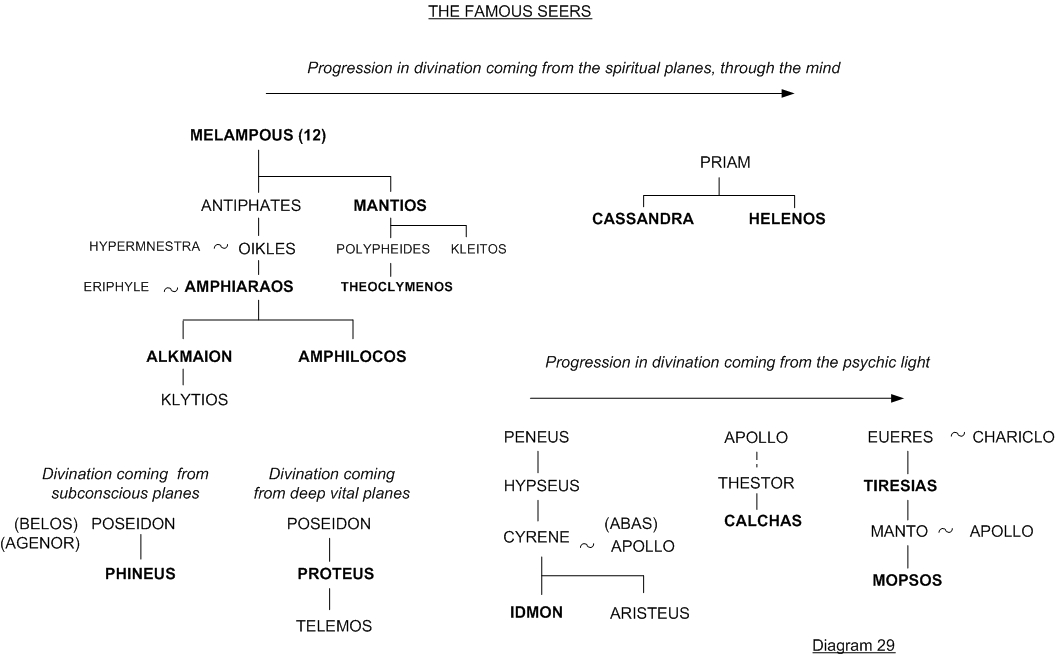 The genealogies appearing above present the different categories of soothsayers or seers involved in Greek mythology and which correspond to different stages of the seeker’s progress.

Melampous “he who has black feet” received from Apollo his gift of prophecy and was initiated into the language of birds. He belongs to the descendants of Cretheus and therefore to the ascent of the planes of consciousness (cf. Family tree 12). He is a contemporary of Jason. It is therefore about mental divinations, intuitions from the mind at the beginning of the path. His descendants express particularities of this mental intuition and of the understanding of the signs that life gives. His descendants are studied in the page ” THE FIRST FIVE CHILDREN OF AEOLUS: SISYPHUS AND HIS SON BELLEROPHON, ATHAMAS, MAGNES, SALMONEUS AND CRETHEUS“.

Idmon and Calchas – who is sometimes presented as a grandson of Idmon – are more linked to psychic divinations, Idmon being presented as a son of Apollo. They would therefore represent the perception of righteousness: right feeling, right speech and right act. However, as Idmon only intervenes in the quest for the Golden Fleece by Jason and the Argonauts, that is to say at the beginning of the path, we can deduce that it is an emerging perception. This intuition, moreover, quickly disappears due to a lack of purification of vital energies: Idmon is killed by a boar.

Phinea also represents the intuitions at the beginning of the path from which the seeker cannot derive any profit: the Harpies steal all the excellent food he receives in thanks for his predictions.

These soothsayers are studied in more detail on the page ” JASON AND THE GOLDEN FLEECE“.

Tiresias is the seer of Thebes, a city symbol of the purification of the chakras at an advanced stage of the spiritual path.

Calchas had to admit that the grandson of Tiresias, Mopsos, was a much greater soothsayer than him: indeed, the purification of the seeker (everything in its right place, which avoids mixing) is much more advanced in myths related to Thebes than that carried out at the time of the quest for the Golden Fleece.

With Cassandra, daughter of Priam, these are intuitions and visions resulting from the access of the seeker to the plane of the illumined mind but which the seeker does not yet trust: nobody listens to Cassandra who is an heroine of the Trojan War.

Proteus is an “old man of the sea” with the gift of prophecy and the power to transform himself. These are therefore intuitions and perceptions from the depths of the vital which relate to very advanced yoga. Proteus appears mainly in the Odyssey.