The Ceryneian Hind which Heracles must bring back alive symbolizes the purification of the planes located above the intellect. 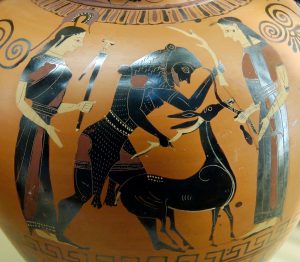 The third labour imposed by Eurystheus was to catch the Ceryneian hind that lived in Oenoe (Oinoe in Greek).

Heracles was to bring her alive without doing her any harm because she was sacred to Artemis. She had golden horns. Heracles pursued her relentlessly for an entire year in Arcadia and finally captured her on the banks of the river Ladon while she was crossing it. Having touched her with one of his arrows without hurting her, he took her on his shoulders. (Pindar offers a variant in which the hero pursued the hind until Hyperborea.)
On the way back, he met Artemis and Apollo. The goddess accused him of having tried to kill the hind that was dedicated to her and tried to take her back. Heracles threw the blame on Eurystheus and the gods then ordered him to move on.

The labours of the Nemean Lion and of the Lernaean Hydra illustrate the two major realisations in the first step of the path, victory over the ego and suppression of desire, the expression of the intrusion of distorted life energy into the higher planes.
The following three labours provide their modalities:
– The labour of the Ceryneian hind through the purification of the spiritual planes (planes above the intellect) in order to allow the influence of higher forces
– The labour of the Erymanthian boar through the progressive rejection of demonstrations of the coarse vital (vital pacification)
– The labour of the Stymphalian birds through the recognition of the mixture of plans (vital and mental) and the realisation of a certain mental calm.
These works, like all others, are spiral shaped and concurrent processes. (This explains why the Boar and the Hind may have been switched in the works of Diodorus. The representations of the victories of Heracles in these two labours appeared on the currencies of Psophis).

The first two take place at symmetrical places of Arcadia, northwest and northeast. Both are closely related to Artemis, the goddess of “integrity” or “total purity”, who “roves over the mountains, along the ridges of lofty Taygetus or Erymanthus, joying in the pursuit of boars and swift deer” (Odyssey, VI, 102-104). Thus, one who cares about purification must work in both registers, that of the purification of the mind and that of the gradual rejection of the disturbances coming from the lower nature.
We must remember that Arcadia is the symbolic province of “endurance” in yoga that leads to achieving “equality”. It derives its name from that of Arcas, the hero associated with “the bear”, image of a “power of resistance or endurance”. The north is a direction of asceticism, the northeast is a yoga related to the future (the hind) and the northwest is related to the past (the boar). This work indicates a realisation that the seeker will obtain at the end of his work towards equality (Arcadia).

The hero pursued the hind for an entire symbolic year to the banks of the river Ladon (close to unity and liberation), a tributary of the Alpheus flowing until Elis (also Λ + Δ) and through Olympia. For the poet Pindar, the race ends in Hyperborea – the land beyond asceticism – where things have no shadow, that is to say, until the Absolute takes charge of the yoga of the seeker who managed to complete transparency, where nothing obstructs the passage of light, above duality. Then the purification is complete.
Pindar adds that the hind was devoted to Artemis by Taygete, one of the seven daughters of Pleiades Atlas, corresponding to the intuitive mind, just before the overmind. In fact, the goddess had temporarily changed her into a hind to prevent her from being abused by Zeus. And Taygete, in gratitude, had devoted the animal to the goddess. Taygete is the penultimate level of the mind, the plane of the intuitive mind of a high purity just before that of Hermes, the Overmind. As Taygete and Zeus are at the origin of the royal line of Sparta, this version from Pindar’s commentators suggests that in order to access the intuitive mind, it is required that the necessary conditions should be met, and it cannot be done by force as long as the time has not come
Apollodorus adds that the hind lived in Oenoe (Oinoe in Greek), place of “divine intoxication”, ultimate goal of this work. (The word Oenoe should be approximated to that of Oeneus (Oineus) who is a descendant of Endymion, the seeker “full of devoted consciousness” who has achieved mental silence.)

Although the name Elaphos (Ελαφος) was used by the Greeks either for a male or a female (Iliad 11.475; 3.24; 11.113) and that the animal has been provided from the beginning with golden horns, the elders considered it without ambiguity to be a hind. It is therefore for the seeker an essentially “feminine” attitude of “responsiveness and dedication”, which is often called “surrender” in this book. This consecration-submission is by no means passivity. That may be why stag and hind had the same name in ancient Greece and the animal seems androgynous, female with male horns. Huge golden horns rising skyward can indeed be observed on antique vases.

When Heracles met Artemis and Apollo on his way back, it is a sign that the seeker is experimenting manifestations of his psychic. Jason, at the end of the quest for the Golden Fleece, only saw Apollo “the morning one” passing by afar.
If Artemis is unhappy, it means that perfect integrity (or purity in which everything is in its place) should be sought neither by force nor for oneself, but only within the narrow framework of the quest imposed by Eurystheus of what is required by the “inner rectitude”.
Virgil gives the hind hooves of brass. This metal was most probably a symbol of hardness in this Bronze Age. The symbol here is a “solid” incarnation in the sense of an alignment of all the planes within the being who is in service.