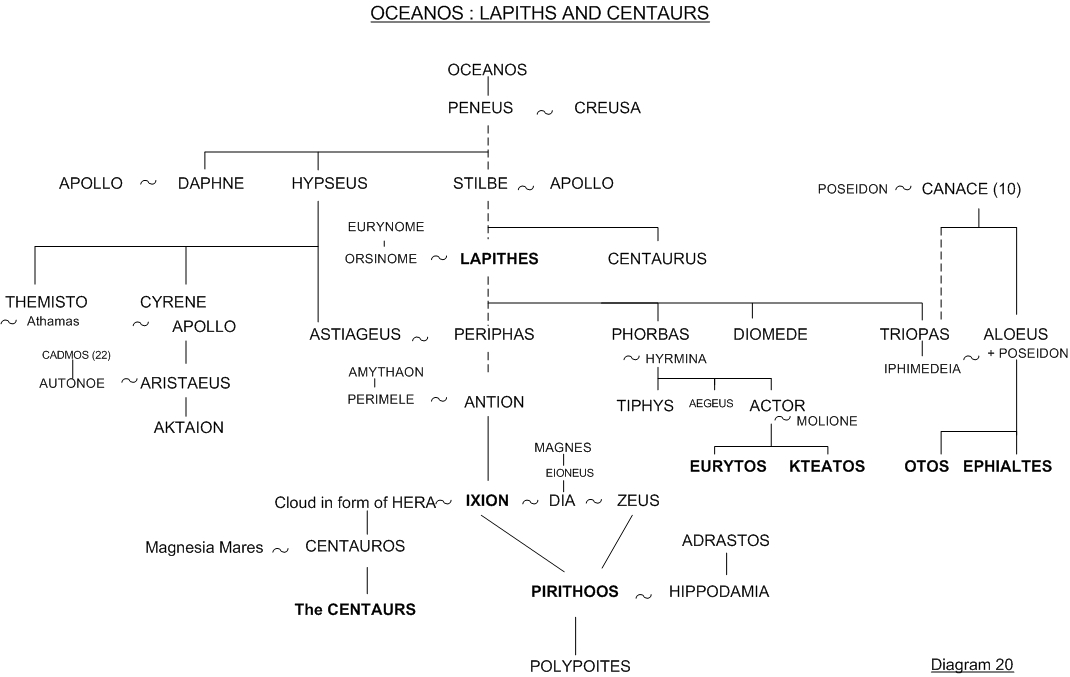 In the tree above, the line of Lapithes was connected to the Peneus River by Stilbe “the one who shines with beauty” who would have united with Apollo, god of psychic light. But the Peneus-Stilbe filiation only appears among the late historians Diodorus of Sicily (1st century BC) and Pausanias (2nd century AD)

Likewise, the filiations Stilbe-Lapithes, Periphas-Antion and Antion-Ixion appear only in Diodore. This family tree should therefore be viewed with caution.

Likewise, in the ancient texts, very many lineages of Lapiths are mentioned but their genealogy is most often confused or little attested.

Ixion being the illustration of a serious spiritual error, we have chosen to group on this page two other great spiritual errors illustrated by the Aloades, Otos and Ephialtes, and by the Molionides, Eurytos and Kteatos.

A description of the first two errors is given on the page ” IXION AND THE BATTLE BETWEEN THE LAPITHS AND THE CENTAURS“. The third error, the one illustrated by the Molionids, is dealt with on the page “LATEST ACHIEVEMENTS OF HERACLES“.

Ixion is the symbol of a very advanced seeker in spirit – he drank nectar of immortality – who believes he has reached overmind and is therefore the equal of Zeus. He pretended to unite with Hera. Zeus, to punish him for his presumption, attached him to a winged wheel which he threw through the air and Ixion whirled there forever. Ixion is the grandfather of the Centaurs, images of seekers who have not purified their lower vital. But he is also the human father of Pirithoos, the friend of Theseus who, symbolically, corrects the errors of the seeker in the beginnings of the path.

The Molionides, Eurytos and Kteatos, represent respectively a will to power and a will to conquer still tainted with ego. They were defeated by Heracles during his last exploits, after the twelve labors.

The Aloades, Otos and Ephialtes, illustrate another form of spiritual pride. According to Homer, only Orion had more noble beauty. But they planned to stack the Ossa on Olympus and on the Ossa, the Mount Pelion in order to assault the sky. They would have achieved it if they had reached adulthood. But Apollo destroyed them.