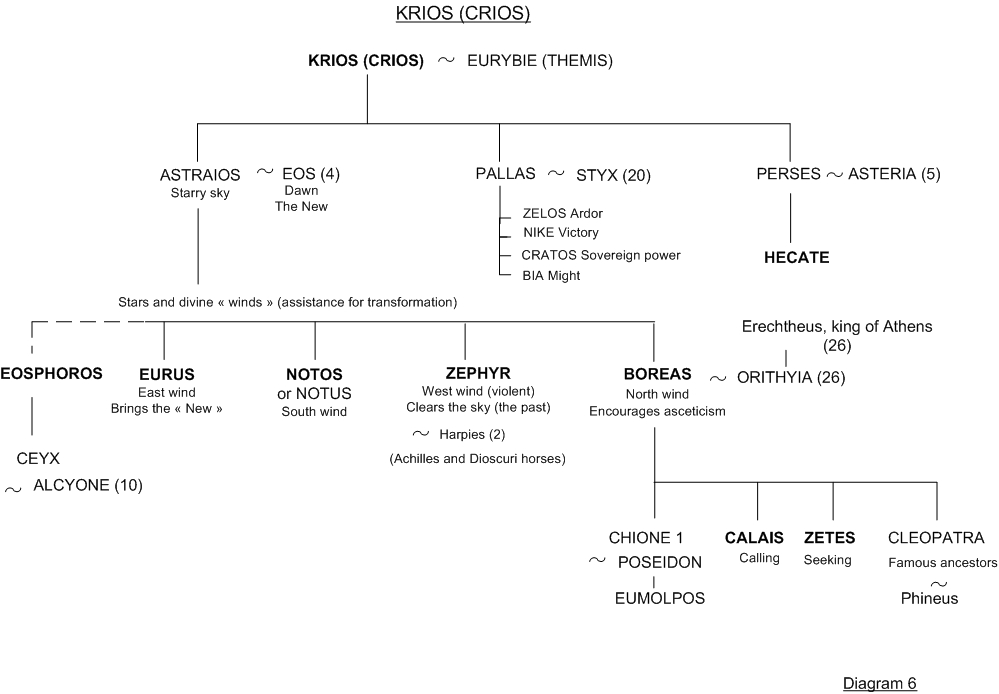 The Krius (or Crius) family tree illustrates the work of the divine forces that govern the evolution of humanity. It is explained in the page ” CRIUS: THE GREAT WINDS BOREAS, NOTUS, ZEPHYRUS AND EURUS, AND THE GODDESS HECATE“.

United to Eurybie “a great power”, he fathered three children:

Astraeos “the luminous impulses (starred)”, who, uniting with the goddess Eos “the goddess of dawn (the New)”, is at the origin of the “divine helpers” which are the four great “winds” which help the seeker in his evolutionary path

-Eurus, the East wind, brings the New. It carries the forces of renewal.

-Boreas, the North wind, cold and dry, is the wind of spiritual asceticism. He had several children including Calaïs “who calls (or the need for something else)” and Zetes “the one who seeks, who strives”.

-Notus, the South wind, is a source of confusion, of a loss of bearings which is sometimes necessary in the spiritual seeker’s evolution.

-Zephyrus, the West wind, forces the seeker to purify himself, in the sense of putting everything in its right place, without interferences (of emotions with the mental, etc.).

These winds can be light breezes or blow in storms according to the moments of the path.

The second son is Pallas “the force which helps to establish total liberation (in the spirit and in nature)”. Through his union with Styx, the river of the underground world in the kingdom of Hades and symbol of the “achievement of total integrity”, he generates the powers that will become available to man when the body-mind unity is effective.

The third son is Perses “the power of transformation”, who, by its union with Asteria “an infinity of luminous points (starry)”, describes the multitude of transformations required to perfect human evolution. This will allow the progressive influence of the goddess Hecate “the one who aims at distant goals” or “the one who is out of the blindness of the spirit”, the divinity who must reign over the near future of humanity.