The Cretan Bull that Heracles must bring back alive represents the ability to contain without artifice the realizing power of the luminous mind. 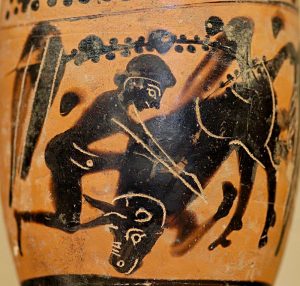 As seventh labour, Eurystheus ordered Heracles to bring the Cretan Bull back alive.
When Heracles arrived on this island, he solicited Minos’ help who, according to different versions, accepted or refused. The hero captured the bull by seizing him by one horn, brought him back to Tiryns, showed it to Eurystheus, then set it free.

Note that according to Pausanias, Heracles captured the bull in Attica, not in Crete. This version is most coherent with the chronology of events as it locates Heracles’ exploit where Androgeos, Minos’ son, perished. According to another version, Heracles would have released the bull in Attica, but this version is less logical because it puts Androgeos’ death after the victory of the hero.

This seventh Labour gives less additional indications, except if compared with other tales mentioning a bull, which the Ancients have not failed to do.
According to some, this bull is the one which took Europe to Crete, Zeus having taken this appearance or the bull simply having been sent by the god.

According to others, it is that same bull which Poseidon pulled out of the sea at King Minos’ request when the latter wanted to prove his legitimacy to reign.
Let us recall that indeed Minos had promised to sacrifice the animal to the god. However, seeing the splendor of the bull emerging from the sea, he decided to keep it in his herd and to offer another one in sacrifice, chosen from his own animals. Pasiphae fell in love with it and confided in Daidalos who intervened to allow the union, from which the Minotaur originated.
Somehow, the bull had taken refuge in the plain of Marathon. This version does not explain how the bull went from Crete to Attica. In order to resolve the problem, polygraphs pretended that Androgeos was killed in Crete.
As we have seen above in Chapter 4, the king of Athens, Aegeus, sent Androgeos, Minos’ son, to fight against him. The failure and death of Androgeos caused the war lead by Minos against Athens. Victorious, the latter imposed a heavy toll on the Athenians: every nine years, young Athenians were offered to the Minotaur. After some time, Theseus, on his way to fight the Minotaur, controlled the bull and offered it in sacrifice. By doing so, he accomplished what Minos could not achieve a long time ago.
This victory of Theseus echoes with Heracles’ seventh Labour, and it must be understood in the light of the Minotaur’s myth of which we will only be looking at the key elements here.
The symbolism of the bull is different of both that of the cow, principle of the illumination of consciousness bringing knowledge, and that of the horse, principle of strength and power (usually associated with the vital).
From the earliest antiquity, the bull represented the guarantor of fertility. It is the symbol of the fertilizing power of the spirit, of the principle generating the New, of the descent of the Divine consciousness and its force in matter and thus, by extension, of the realising and creative ability.
In this study, we adopted the symbolic significance of the bull given by Sri Aurobindo: «the power of the luminous mind».

There can therefore be no question of casually «killing» the bull, but only of «sacrificing» it, that is to say to put this power not at the service of the ego, but to that of the Absolute based on the perception of the truth brought by the psychic being.
The symbol of the sacrifice must be understood in the myths as the progressive realisation of «transparency» to the influence and the action of the Absolute, which explains why, in Hyperborea, Apollo’s land, things and beings no longer have shadows. The notion of «sacrifice» is substantially developed by Sri Aurobindo in The Synthesis of Yogas, Part 1«The Yoga of Divine Works».
Minos’ refusal to sacrifice the bull to Poseidon indicates that at this point the seeker has not yet appreciated the extent of the power of his ego.

At first, Jason had to demonstrate his ability to control by putting Aeetes’ bulls under the yoke to plough Ares’ fields: before the first response of the planes of the spirit would occur, the seeker had to prove his aptitudes to control this «power of the luminous mind», which until now was only achievable with a holistic spiritual vision and power originating from the soul to which the seeker had no access (Aeetes). At this stage, it is only question of short bursts from the illuminated mind (or even from the planes of intuition and of the overmind) in the progression of the higher mind.

This Labour thus concerns all the seekers who rise above the ordinary mind and penetrate into what Sri Aurobindo calls «the intermediary zone» in which the seeker starts to receive influences from above and to live experiences without having undertaken a sufficient purification of his outer nature. This zone has been described at length in a previous chapter and we are only mentioning here a few of the main points.
The seeker can therefore become the prey of lower or hostile powers that wish to act through him. When forces from the higher planes flow, often an inflation of the ego follows, making it feel strong, divinised, luminous. The mind and more specifically the vital tend to seize these forces and to use them for the ego’s purpose, or they merge the demands of the latter with the service of something higher, which has the same results. Sri Aurobindo also writes that «impersonality in itself» is not the Divine, and that many think they are impersonal and free from ego because they are obeying a force or something bigger than their own personality – but that force or that something may be quite other than the Divine and it may hold them by something in their personality and ego (More-Lights-on-Yoga -Bases of Sâdhanâ. p 47 English original)

His projects and creations are thus under the influence of the ego or of hostile forces, even if the seeker believes he offered then to the Divine.
According to Sri Aurobindo, if the seeker is purified and sincere enough, if he is not abnormally vain, selfish or ambitious, if he receives a sound direction from his spiritual master or if he is vigilant enough, or even if his Psychic Being leads his outer being, he must be able to avoid the traps of this intermediate zone and of mixing spiritual influences with a non-purified ego, as well as to pass this zone with a minimum of troubles.
The feats of Theseus provide a general overview, according to the ancients, of the conditions or purifications required for eradicating the Minotaur, including the victory over the Pallantidai, and the fight against the bull of Marathon.

The description of this Labour of Heracles does not indicate whether the hero avoided or overcame the difficulties mentioned above. The myth only states the need for passing this zone in order to enter the higher planes of spiritual consciousness. The seeker should thus, in principle, be protected from all serious falls like the Minotaur’s, and should be able to use the power of the luminous mind without being disturbed while sacrificing it in the right way.

Heracles must therefore demonstrate his ability to control without artifices – with bare hands -the power of the luminous mind. It must be able to express itself within a nature in the process of being purified and must be at the service of the seeker’s «life purpose» or his «task». This implies a progressive detachment from all concerns for result, from all attachment to actions and their fruits.
According to Diodorus, Heracles returned to Greece on the back of the bull, showing a perfect control of the power of the enlightened mind.