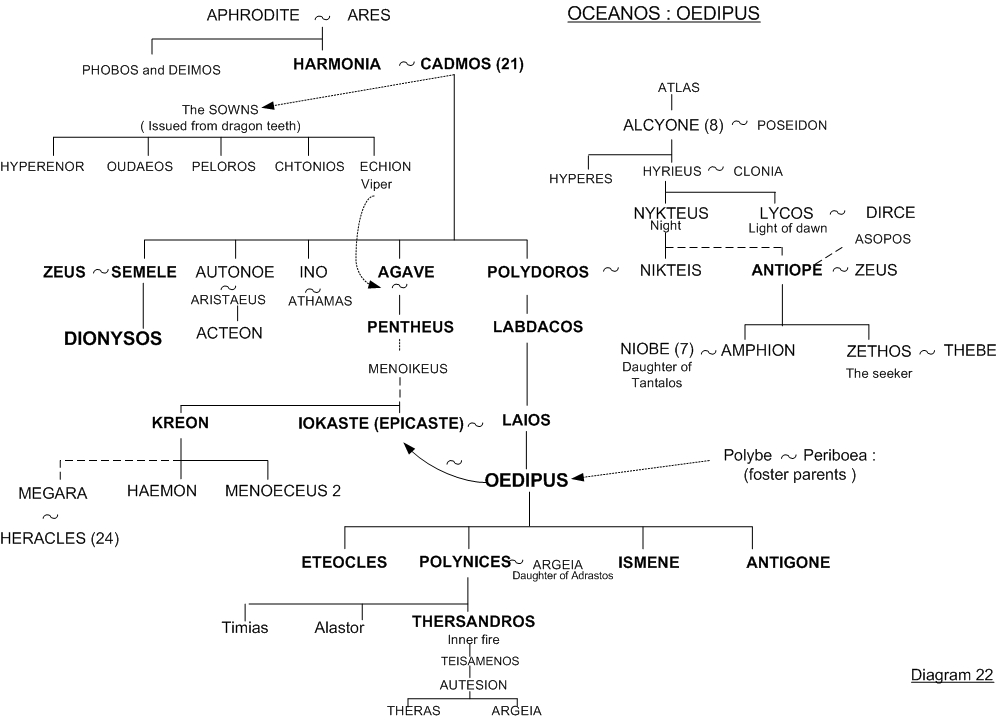 The family tree above is a branch of “FAMILY TREE 21 – OCEANOS: THE INACHIDS“, which describes a line from the son of Oceanos, Inachus, and therefore relates to the process of purification / liberation. Inachus, let us remember, embodies “the evolution of concentration (of the seeker)” or “the evolution of the process of bringing together the different parts of the being” around the psychic being.

The above branch relates more specifically to the descendants of Agenor “the brave, the noble” who, wed to Telephassa “purity in the distance”, describes an advanced process of purification. It is described in detail in the page “OEDIPUS AND THE THEBAN WARS”.

It begins with the son of Agenor, Cadmus, who symbolizes “the opening of the conscience to mastery” and is reputed to be the founder of Thebes.

Cadmus married Harmonia, illustrating a way of incarnation of the inner being by which “the yoga of mastery” and “purification” with a view to the “transparency” of the being takes for goal “the exactness” represented by Harmonia , in the sense of everything in its proper place.

His son Polydoros is “the one who gives himself a lot”, or “the gift of oneself”, or the one who has “many gifts”, that is to say, the full development of the personality and his abilities.

Polydoros is the grandfather of Laius, himself the father of Oedipus, whose myth illustrates a seeker who, unconsciously, cuts himself off from his divine roots, while continuing to pursue the same goals.

Before arriving at Thebes, Oedipus killed the Sphinge, also named Phix. The latter is a girl whom Orthros “the lie” engendered with her own mother Echidna “the cessation of evolution in unity” or with the Chimera “the illusion”, daughter herself of Echidna. She is therefore the symbol of perverted wisdom and spiritual pride, a lie disguised as truth.

The children of Oedipus fought a fratricidal war for the throne of Thebes at the seven doors, symbol of a deep attempt to purify the seven centers of consciousness-energy in the body or chakras. This first attempt was a failure. This purification will only be possible with the victory of the Epigones led a symbolic generation later by the children of the first. This purification takes place before the Trojan War begins.