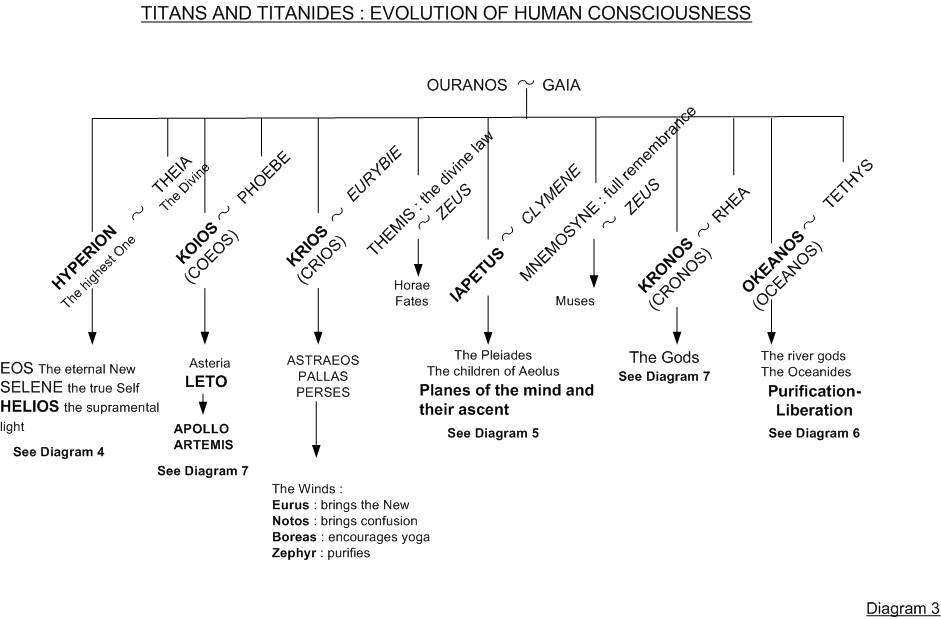 The Titans and Titanides come from the union of Ouranos and Gaia (Cf. Family tree 1). They are powers which belong to the world of creation, that is to say to the supramental world as defined by Sri Aurobindo. They are described in detail in the page “THE STRUCTURE OF MYTHOLOGY: THE TITANS AND THEIR DESCENDANTS” and constitute the structure on which almost all of the myths are built.

The reign of the Titans corresponds to the childhood of humanity, that of the Garden of Eden described in the Bible also known as the Golden Age. Men then had a number of powers at their disposal.

When in mankind the mind took over the instincts and impulses of childhood – at the end of the long war between the Titans and the gods – the reign of the gods was established. The Titans were relegated by Zeus to Tartarus, indicating that the forces of creation would no longer be available to man as long as the crossing of the mental plane lasted.

Four Titans are united with Titanides, thereby expressing forces fully active in the manifestation. The Titans Iapetus and Krios are associated with goddesses of lower rank because in all likelihood the ancients wanted to express that the “real” unions could not be achieved until humanity had completed the preliminary stages represented by these temporary unions.

Each Titan has a specific domain of ​​action.

-Koios is the source of the divine sparks around which psychic beings are formed.

-Japet presides over the evolution of consciousness in humanity

-Cronos is at the origin of the powers of the overmind, the twelve gods of Olympus, responsible for helping humanity in its progression through the planes of the mental plane.

-Oceanos is the father of all currents of consciousness-energy and evolutionary processes. 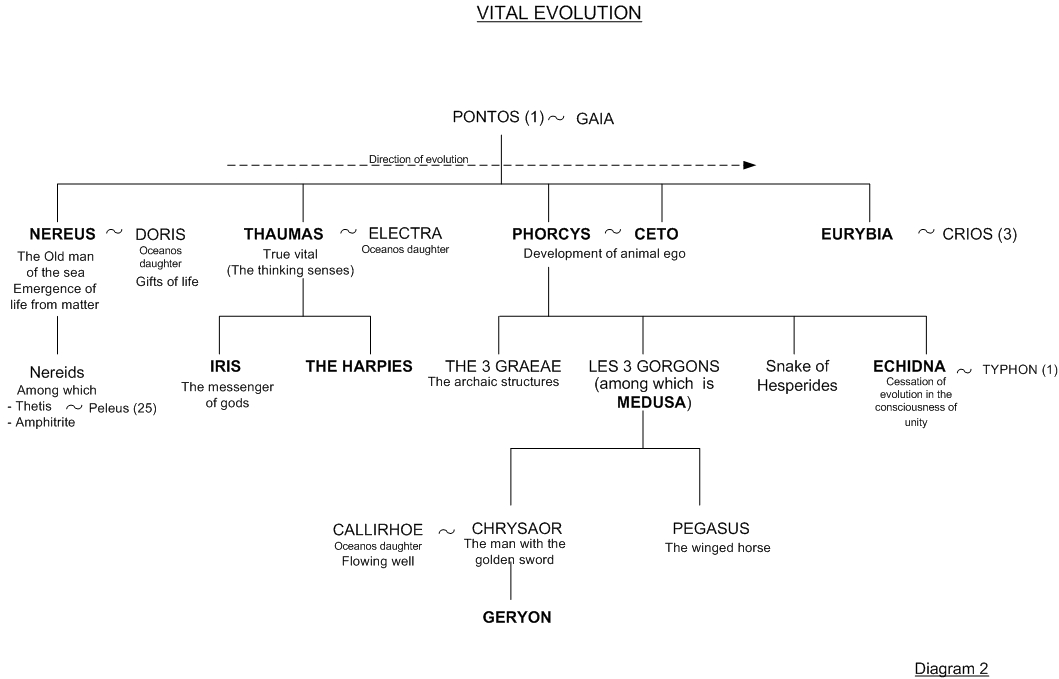 FAMILY TREE 2 – THE EVOLUTION OF LIFE

The family tree represented above comes from Pontus “the sea stream”, symbol of Life. It is explained in the page “The offspring of Pontus“.

Pontus is a son of Gaia whom she fathered alone (See the board of Origins).

United with his mother Gaia, to the principle of Existence, Pontus fathered five children who represent the five stages of vital growth which applies to both the plant and animal kingdoms and to the human kingdom. Man indeed keeps within him the memories of evolution.

The first child is Nereus called “the old man from the sea”. It indeed represents the emergence of Life out of matter, from the first living cells to multi-cellular animals. He is united to Doris “the Gifts of Life”.

The second is Thaumas “admirable, amazing, marvelous” which characterize animals for which there is not yet a center where sensations are reported, no brain. The senses “think” independently of each other.

-Iris, “the messenger of the gods”, that is to say what makes the link between bodily consciousness and the highest of mental consciousness.

-The Harpies, symbols of the principle of homeostasis or its reverse, the disruption of balance, which are the basic processes of evolution: stability and setting in motion.

The next two children are related to the formation of the animal ego (not the human ego). The first Phorcys embodies the dissociation process while the second Keto the principle of fusion. They united and had several children:

-The Graeae which represent the rudiments of consciousness and memory (the three of them have only one eye and one tooth).

-The Gorgons including Medusa who embodies fear.

-Echidna, the symbol of a perversion that appears in evolution.

When Perseus slices the neck of the Gorgon Medusa, then Chrysaor “the man with the golden sword” and Geryon “the powers of life” can appear, as well as the winged horse Pegasus, symbol of a free vital.

Pontus’ last child is Eurybie “the large Life”, that is to say without limitations.

These five children of Pontus are therefore associated with states of consciousness that the seeker of Truth explores in reverse as he progresses. 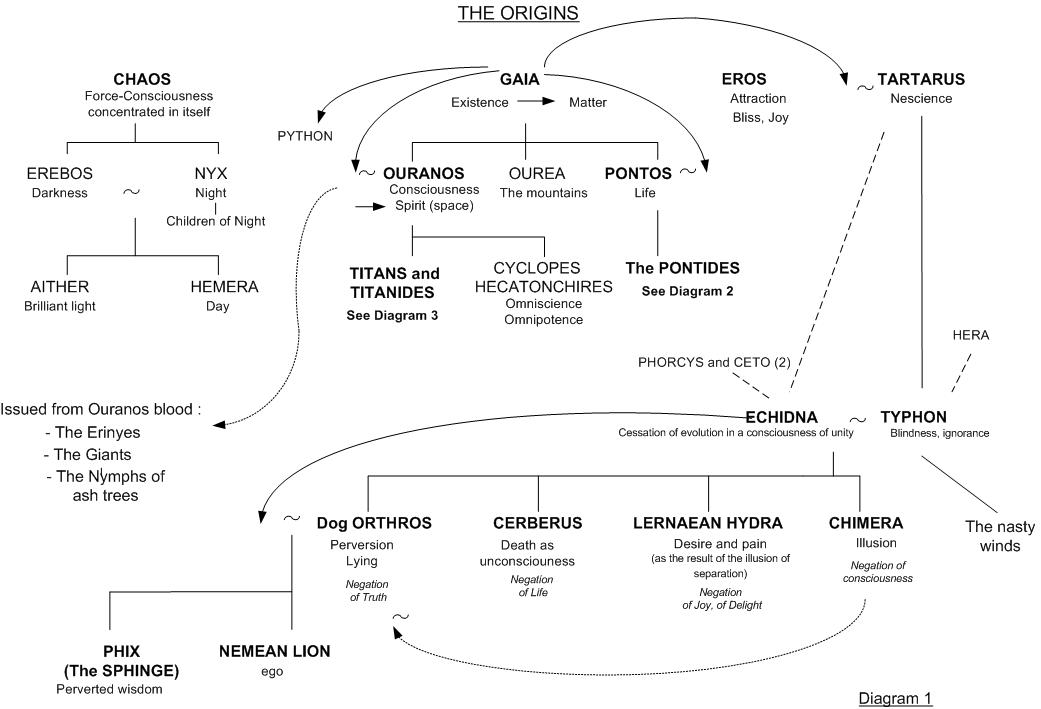 The first branch deals with the way in which the Supreme, the Absolute concentrated in Himself represented by Chaos, has objectified Himself in two successive stages: first by Darkness and Night, then by Divine Light and the Day light.

The second branch comes from the first principle “Gaia” which, before it splits, symbolizes the Existence / Consciousness unity. Then this principle is split into Consciousness (Ouranos) and Existence (Gaia), which by successive densifications will be manifested by Spirit and Nature.

At the same time appeared Eros, the principle which links Existence and Consciousness and is expressed by divine ecstasy, bliss or Ananda of the Vedas. Appeared also Tartarus, expression of Nescience, i.e. negation of Consciousness. Note that Tartarus is not the unconscious which is symbolized by the god Hades.

Gaia then gave birth to Pontus, Life – See Family Tree 2 -, and Ourea “the high mountains” which enable humanity to achieve union with the Divine in the Spirit.

Then Ouranos engendered with Gaia the powers of creation, the six Titans and the six Titanides, from which all the genealogical trees of mythology come – See Family tree 3 -, as well as the Cyclops and the Hecatonchires or Hundred-Arms giants, principles on the one hand of divine Omniscience and on the other of divine Omnipotence and Omnipresence.

From Tartarus came Typhon, the symbol of Ignorance, and Echidna, symbol of a perverted evolutionary movement.

Typhon and Echidna united to give birth to the four great monsters that represent the greatest obstacles to evolution:

-The dog Orthros, symbol of the negation of the Truth and therefore of the lie

-Cerberus, the dog of Hades which keeps the access to the underground world, to the consciousness of the unity Spirit / Matter. It represents the negation of Life and therefore also of the awareness of the real nature of death.

-The Lernaean Hydra, symbol of the negation of Joy, due to the desire that comes from the illusion of the consciousness of being separated and therefore from the associated suffering.

-The Chimera, symbol of the negation of the Consciousness, and therefore of the Illusion.

Orthros and Echidna united to give birth to the Nemean Lion, symbol of the Ego, and to Phix – the Sphinge – who embodies perverted wisdom.