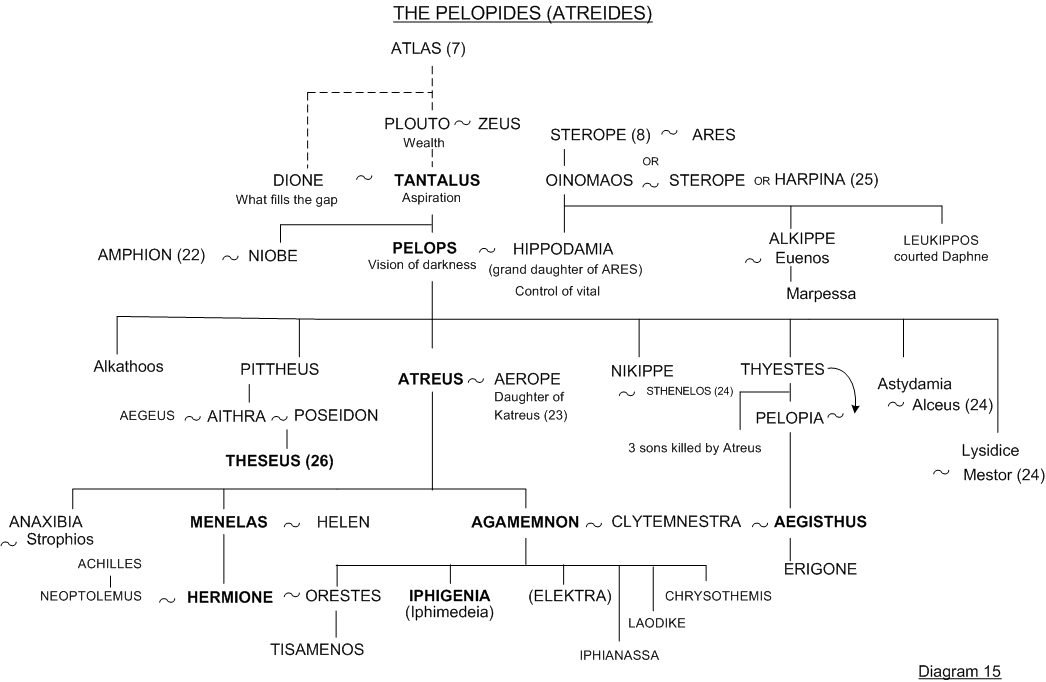 This page presents the Tantalus Family Tree. The corresponding myths are studied in the page “THE LINEAGE OF TANTALUS: PELOPS, ATREUS AND AGAMEMNON“.

Tantalus’ parentage with Plouto and Atlas is only mentioned by late historians and therefore unreliable. It appears here only for the record.

Tantalus is mentioned by Pindar as a familiar with the gods with whom he shares nectar and ambrosia, and even as an immortal: he is the image of a seeker familiar with the forces of the overmind, having achieved liberation in spirit.

This achievement which marks the beginning of the lineage therefore supposes a very advanced degree of progression in the mind and in yoga in general.

His name could be built around the root Tal “to endure”.

The punishment of Tantalus, like that of Sisyphus and Tityos, takes place in the kingdom of Hades, that is to say in the bodily unconscious. It illustrates the fact that the adventurer of consciousness whose aspiration has descended into the body to the cellular level cannot benefit from its results which he nevertheless approaches very closely.

His son Pelops “the vision of the shadow” or “the one who approaches the vision” is known to have been sacrificed by his father and then resurrected by the gods, then provided with an ivory shoulder by Demeter: the adventurer of consciousness then half crosses the “Door of the gods”, of immortality. Pelops conquered by hard struggle his wife Hippodamia “the one who has the mastery of the vital” or “the one who has the mastery of the force”. He then founded the Olympic Games, symbols of the end of “personal yoga” and the beginning of yoga for all humanity.

Pelops’ son Atreus is “the one who does not tremble” and who opens the line of Atreides. Atreus is the symbol of the achievement of “equality” and of a “powerful determination” which support the will to transform, linked to a strong capacity for endurance. It is this determination transmitted to his sons Agamemnon and Menelaus which will allow their victory over the Trojans, and therefore the definitive reorientation of yoga.

Agamemnon, “powerful will and discerning intelligence” is according to Homer “the most greedy of all the Greeks”, that is to say the symbol of a very strong aspiration.

Her brother Menelaus “the one who desires freedom” or “the one who remains faithful to his vision” is the husband of Helen “the evolution towards freedom”, cause of the Trojan War.