As sixth labour, Heracles was ordered to chase out the Stymphalian birds. These birds represent the perturbators that must be eliminated in order to achieve progressive quietness in the mind. 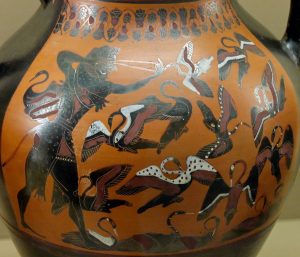 They lived in large numbers in the thick forests that lined the banks of the lake located in the northeast of Arcadia. Apollodorus adds that these birds took refuge in the thick forests because they feared being preyed upon by wolves.
The hero led them away with a bronze rattle made by Hephaestus and given to him by Athena. Standing on the top of the nearby mountain, he frightened the birds that left the cover of the forest.
Some authors add that the hero killed them with his arrows.

This task takes place in Arcadia, the symbolic province of “endurance” in yoga that leads to achieving “equality”. The extreme northeast represents a very advanced stage in this realisation.

In the early versions, the problem that these thought-birds seemed to create was only due to their number. For other authors, the difficulty was to get them out of the dense forest, i.e. to become conscious of them.
For some, this referred only to hunting them, for others, this also meant killing them.

The birds represent the thoughts, but are concerned here only those that are closely related to the vital, which is symbolised by the thick forests along the lake Stymphalia. It is therefore question neither of the intellect nor the mental vital, but of the layer of the human mental physical that relies on the animal sensory mind. The latter, still present within man even though it has largely been controlled over thousands of years, has accompanied the development of animal life, allowing it to organise sensory experiences based on the pleasure/pain duality. It consists of a receiving part and of a dynamic part which is expressed by an ability to respond automatically. It is an often obsessive mind which goes around in circles and repeats itself, deals with trivialities and forms the basis of habits.
If the labour involving the Hydra was mainly related to the liberation from desire and purification of the emotional mind, that of the Birds ultimately aims at extracting the root of duality in the physical mental which is based on this sensory mind.

In primitive texts, the labour consists only in hunting the thought-birds, i.e. separating the pure sensations from the automatic thought processes that associated themselves to them, to liberate the automatic process of identification (or attachment) and of response to the stimulation of the senses. For other later authors, Heracles had to kill them using his arrows, i.e. take a more determined action to acquire a more extensive mental silence.
In any case, this refers to regaining the pure Will which is the expression of the soul (through the separation of the mental and the vital, meaning purification).

This does not refer to the birds hunted by the Argonauts in the quest for the Golden Fleece, with sharp feathers like arrows that were projected towards men. This quest was at the beginning of the path, and therefore refers to destructive thoughts which judge or convey hatred, contempt, etc.

The forests “refuge of birds that feared to be the prey of wolves” refer to all the thoughts that were rejected from the conscious mind and took refuge in this sensory mind attached to pleasure and pain, and refuse the higher light (we already explained the confusion of the root λυγ “the light before dawn” with that forming the word wolf).
For some authors, in order to bring out the birds from the forest, Heracles had to resort to rattles, instruments which generate repetitive sounds: the seeker can therefore use “mantras”. These are words or short sentences bearing a higher energy which should be repeated in a particular state of concentration. In this case, they must be recited as often as possible to calm the undisciplined mind who is often reticent to any kind of pressure from the intelligence.
The use of the mantra is universal, both in the initiatory pathways as well as in religions. To name a few: Aum, Amen, Gayatri, the prayer of the heart of the Orthodox religion, the many Indian mantras, various universal prayers, etc. Its use has never been really challenged in any manner, and has always been accompanied by individualised teaching. Traditionally, it is taught by the teacher who is supposed to know the power of sounds and their effects. This is why it was Athena, the guide and protector of yoga, who gave the rattle to Heracles. And it is Hephaestus, the god who creates forms, who shaped it. The mantra is, thus, well adapted to the difficulties and the nature of the disciple.